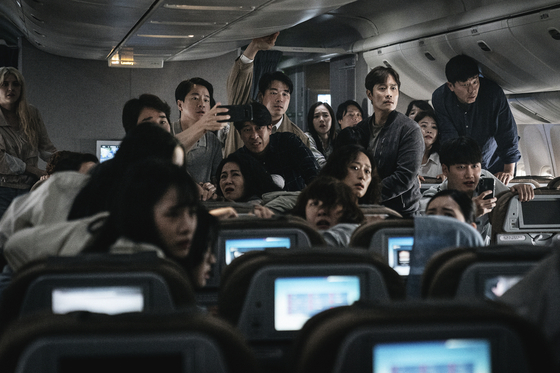 A scene from ″Emergency Declaration″ [SHOWBOX]

“Emergency Declaration” revolves around passengers on a plane flying from Incheon to Hawaii when an unidentifiable virus begins to quickly spread and infect people through their respiratory passages. In the face of disaster, the passengers, flight attendants and pilots must find a way to land the plane safely and quickly to minimize the number of casualties. Back on land, government officials and regular citizens must decide how they will respond to the situation.

The film was invited for the Midnight Screening section at the 74th Cannes International Film Festival along with the star-studded cast of Song Kang-ho, Lee Byung-hun, Jeon Do-yeon, Yim Si-wan and Park Hae-jun.

“Hansan: Rising Dragon,” which is director Kim Han-min’s second film of his trilogy depicting Korea’s much celebrated historical figure Yi Sun-shin (1545-1598) which garnered more than 7 million tickets since its release in July 27, was also exclusively released on the platform on Monday.