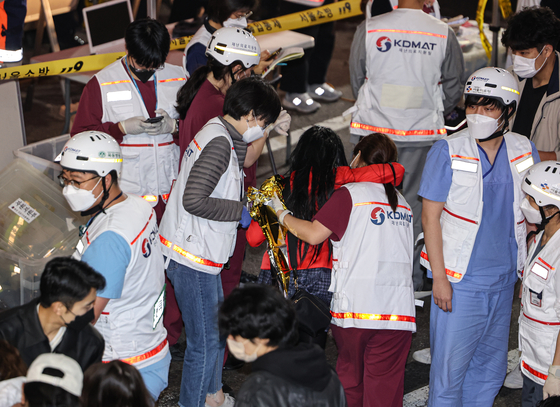 Medical staff dispatched to Itaewon on Oct. 30 morning look after those who are injured from the crowd crush. [YONHAP]


A disaster medical assistance team (DMAT) was dispatched in Itaewon about an hour after the first report was made to the fire department last Saturday.

“The DMAT first arrived at the site at 11:20 p.m., which was the team from Seoul National University Hospital,” said Park Hyang, a senior health official at the Korea Disease Control and Prevention Agency (KDCA) during a briefing on Wednesday.

“Before the DMAT arrived, the fire department was in charge of the incident site.”

The DMAT is a team formed for medical support in emergency situations, such as disasters. It is staffed by medical professionals, including doctors, nurses and emergency medical technicians.

“According to the manual, the fire department needs to deal with the site before the DMAT arrives and set up an on-site treatment center,” said Lee Yil, director general of 119 rescue & EMS bureau of the National Fire Agency.

The first report regarding the crowd crush made to the fire department was at 10:15 p.m., which was then reported to the Interior and Safety Ministry at 10:48 p.m.

It has been pointed out that the lag in communication delayed the appropriate response, such as prompt treatment at the site.

The death toll from the Itaewon crowd crush is 156, including 26 foreigners, according to the Central Disaster and Safety Countermeasure Headquarters, as of Wednesday afternoon.