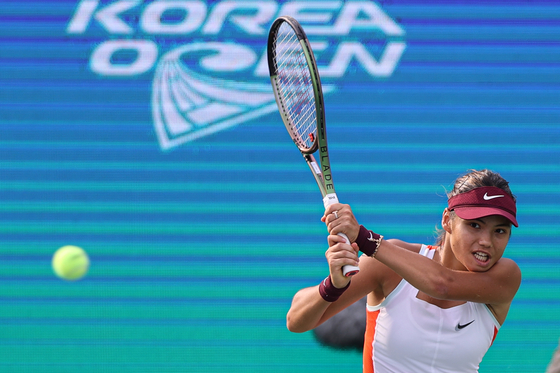 Emma Raducanu returns the ball during a round of 16 game against Yanina Wickmayer of Belgium at the Hana Bank Korea Open at Olympic Park Tennis Center in Songpa District, southern Seoul on Thursday. [YONHAP]


2021 U.S. Open Champion Emma Raducanu is through to the quarterfinals of the Hana Bank Korea Open, beating No. 396 Yanina Wickmayer of Belgium in two straight sets at the Olympic Park Tennis Center in southern Seoul on Thursday.

Wickmayer started out confident against the 19-year-old Grand Slam winner, finding her first ace on her second serve.

Raducanu broke Wickmayer for the first time in the fifth game, but Wickmayer wasn’t one to back down, immediately breaking Raducanu herself to level the score at 3-3.

Despite her serve wobbling a bit, with three double faults, the 19-year-old quickly dealt with the rest of the first set, with a couple of aces carrying her to a 6-3 win.

Raducanu started the second set strong, winning three games in a row before starting to struggle as Wickmayer rallied to tie the score at 5-5.

The Belgian managed to push the second set to a 12th game, but Raducanu rallied to take the final game to break point and win the set 7-5 to claim the victory. The game lasted one hour and 40 minutes.

“My strategy today was to first start the match just trying to swing for the ball and be loose and not care too much about making mistakes and just accepting them more,” Raducanu said.

Raducanu had nine aces and six double faults on Thursday, her serves at times reaching 118 kilometers per hour.

“I was happier with my serve today than yesterday as well,” said Raducanu.

“I think I was hitting all my spots pretty well. I was mixing it up and I think that I wasn’t as predictable today. I think that serving big and serving well and a lot of aces especially in the second set helped me get off to a pretty good lead, 4-1 up, which gave me bit of a cushion because Yanina started fighting back and it was a competitive second set. The serve definitely helped me build a little bit of a cushion there.

Raducanu is one of the biggest underdog stories in modern tennis, after she became the first player to win a Grand Slam title after starting in the qualifiers. She had only made her Grand Slam debut at Wimbledon last year, just two months before entering the U.S. Open. She was ranked 150th in the world but still managed to smash through the U.S. Open without dropping a set to reach the finals, which she also won in straight sets.

However, despite reaching world No. 10 in July this year, Raducanu started to struggle and slowly slid down the world rankings to enter Wednesday’s match at No. 77.

Wickmayer, who debuted in 2004, reached No. 12 after reaching the semifinals of the 2009 U.S. Open. This isn’t her first time at the Korea Open, having reached the second round in the 2014 edition, her last tournament that season before being diagnosed with Lyme disease.

Raducanu’s quarterfinal opponent will be third seed Magda Linette of Poland, who beat world No. 23 Kristina Mladenovic of France two sets to one after a grueling two hours and 26 minutes on Thursday.