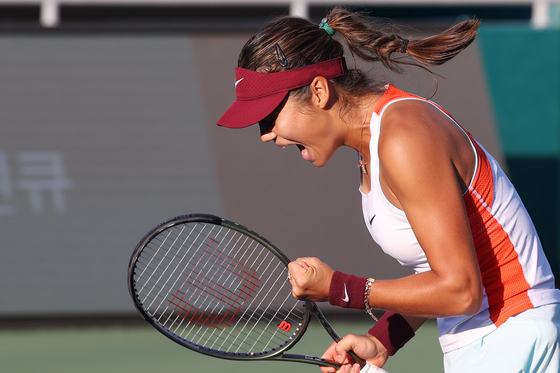 Emma Raducanu reacts after beating Moyuka Uchijima of Japan in two straight sets, 6-2, 6-4, in the round of 32 of the Hana Bank Korea Open at Olympic Park Tennis Center in Songpa District, southern Seoul on Wednesday. [YONHAP]


Sixth seed Emma Raducanu advances to the round of 16 at the Hana Bank Korea Open after beating world No. 126 Moyuka Uchijima of Japan in two straight sets at Olympic Park Tennis Center in Songpa District, southern Seoul on Wednesday.

The biggest crowd that the Korea Open has seen this year turned out for the hour and 18 minute match to watch the 19-year-old Grand Slam star play her first round.

Raducanu is one of the biggest underdog stories in modern tennis, after she became the first player to win a Grand Slam title after starting in the qualifiers. She had only made her Grand Slam debut at Wimbledon last year, just two months before entering the U.S. Open. She was ranked 150th in the world but still managed to smash through the U.S. Open without dropping a set to reach the finals, which she also won in straight sets.

However, reaching world No. 10 after that Cinderella run, Raducanu started to struggle and slowly slid down the world rankings to enter Wednesday’s match at No. 77.

On Wednesday, despite conceding the first game quickly, Raducanu swiftly took her first serve game, shutting out Uchijima 40-0, then broke her serve to take the lead. Raducanu broke another of Uchijima’s serves to quickly win the first set 6-2.

Returning with vengeance in the second set, Raducanu broke the first three of her opponent’s serves to take a five game lead in under than 20 minutes.

Uchijima needed something special to avoid a bagel and Raducanu’s double fault in the sixth game was just that, giving the Japanese player her first break. Meanwhile, Raducanu seemed to have lost her edge, conceding four games in a row.

“I think it was overall a pretty solid match until the end of the second set,” said Raducanu in a post-match interview. “It’s tough when you haven’t been playing that many matches, you’re not as used to those situations. I’m really happy with the way I regrouped and held the serve on that last game because it was really important to win that game.”

Raducanu’s serve, which had reached speeds of over 136 kilometers per hour at times, saved her in the end. Her last 114-kilometer-per-hour ace handed her the win, 6-4.

“I think I was just thinking of my first serve,” said Raducanu. “Because I knew that if I got a good first serve it would help me a lot. I was trying to hit an ace and I did, I hit two. My serves helped me out a lot.”

Raducanu’s second-round opponent will be No. 396 Yanina Wickmayer of Belgium, who beat No. 74 Linda Fruhvirtova of the Czech Republic in two straight sets 6-1, 6-4 on Wednesday.

“My goal on the court is to keep trying to swing freer and freer in each match,” said Raducanu. “And my other goal is to try and stay in Korea for as long as possible.

“Honestly, I love it so much here in Korea. I feel so at home here. Everything is so much better. It’s so clean, the food is unbelievable. I just want to spend as much time as I can in Korea as I can.”

Raducanu will play her round of 16 match on Thursday.