Enmity between Koreans and Japanese recedes

Enmity between Koreans and Japanese recedes 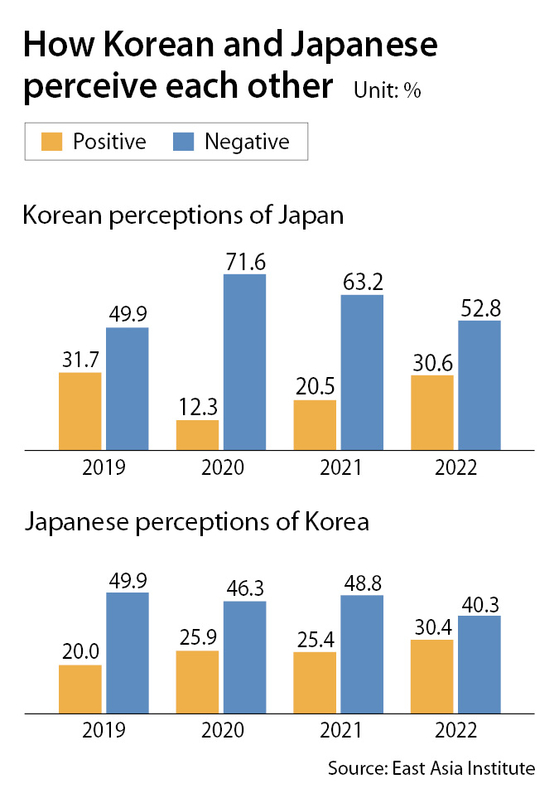 Koreans and Japanese are almost as positive about each other as they were before diplomatic and trade friction flared in recent years.

According to a survey by the Seoul-based East Asia Institute (EAI), which questioned 1,028 Koreans and 1,000 Japanese, the proportion of Koreans who view Japan positively rose from 20.5 percent last year to 30.6 percent this year — the highest percentage since the 31.7 percent recorded in the same survey in 2019.

The proportion of Japanese respondents who view Korea positively increased from 20.0 percent to 30.4 percent in the same time frame.

The 2020 survey recorded an all-time low of Korean respondents who viewed Japan positively, 12.3 percent, reflecting public anger after Tokyo removed Seoul from a list of preferred trading partners and restricted the export of high-tech materials.

Japan’s moves were widely seen as retaliation for Korean court rulings in 2018 ordering Japanese companies to compensate Koreans who were forced to work during Japan’s colonial occupation of Korea, and a sign of its unwillingness to take responsibility for historical misdeeds.

Despite the increase in positive ratings of Japan among Koreans and vice versa, a plurality of respondents in each country still viewed each other negatively.

According to the survey, 52.8 percent of Korean respondents have an overall negative impression of Japan, while over 40 percent of Japanese respondents said they view Korea negatively — a larger proportion than the 30.4 percent of respondents who say they view their neighbor positively.

Mistrust appears to run high among respondents who said they view their neighboring country negatively.

But Koreans appear more hopeful that bilateral relations will improve.

Over 45 percent of Korean respondents said they believe relations will improve under President Yoon Suk-yeol, while only 26.8 percent of Japanese respondents expressed the same belief.

During his Aug. 15 Liberation Day speech, Yoon called Japan a “partner” in the face of “common threats that challenge the freedom of global citizens.”

But Yoon’s speech did not mention pending bilateral problems.

The Korean Supreme Court is expected to soon finalize a liquidation of assets belonging to Japanese companies involved in the cases.

Respondents from the two countries appear to be at odds over how the dispute should be settled.

While 36.5 percent of Korean respondents said the companies’ assets should be liquidated to compensate forced labor victims, 30.6 percent of Japanese respondents said such a decision would contravene the 1965 treaty that restored diplomatic relations between Seoul and Tokyo.