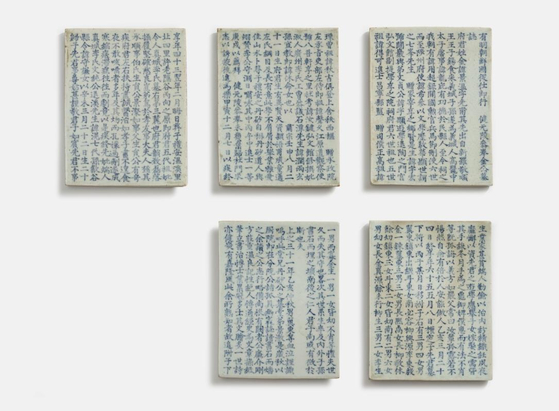 The epitaph plaque for Kim Gyeong-on, who used to be a tomb keeper for Geonwolleung that holds the tomb of King Taejo (1335-1408), was created in 1755. Five tablets complete the set. [CULTURAL HERITAGE ADMINISTRATION]


Epitaph plaques of two officials from the Joseon Dynasty (1392-1910) that had been circulating in Japan for decades when they should have remained buried together with the deceased, finally returned to their assigned places.

The Cultural Heritage Administration and the Overseas Korean Cultural Heritage Foundation unveiled the epitaph plaques for Kim Gyeong-on and Yi Seong-rip that were donated by a private collector from Japan on Sept. 28. The two institutions held a donation ceremony at the Korean Studies Institute on the same day, in Andong City, North Gyeongsang.

Epitaph tablets are stone or ceramic plaques that record details of the life of a deceased person. The information includes their achievements, personality and family relations.

“Such tablets have a great significance today in the study of not only the life history of deceased individuals but also the history of the times,” the administration said.

The two epitaph plaques both used white porcelain, but used different underglazes, giving the two a quite different appearance. 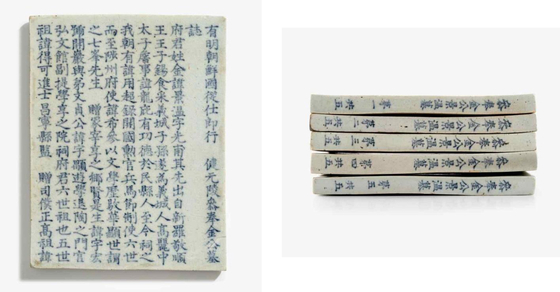 Epitaph tablets are stone or ceramic plaques that record details of the life of a deceased person. The information includes their achievements, personality and family relations. [CULTURAL HERITAGE ADMINISTRATION]


The tablets that belong to Kim (1692-1734) used cobalt-blue underglaze and the complete set includes five tablets. The calligraphy, compared that on Yi’s tablets, appears very neat as block letters were used to record Kim’s information. Kim was a descendant of the Uiseong Kim clan in North Gyeongsang. He was a grandson of Kim Seong-gu, who had served as governor of Gangwon. His epitaph plaques were created in 1755.

According to the Cultural Heritage Administration, the owner of the epitaph tablet was a “smart man, who received the top score in the Classics and Literary Licentiate Examination.” He was appointed as a tomb keeper for the royal tomb Geonwolleung, which holds the tomb of King Taejo (1335-1408), the founder of the Joseon Dynasty. But he soon resigned and returned to his hometown in Yean, the old name for today’s Andong region, where he devoted himself to fostering young students.

The epitaph plaque for Yi Seong-rip (1595-1662), who served as a military official during the Joseon Dynasty, only has two tablets, but the cultural heritage administration said its unique features make it highly valuable “for the rarity and the uniqueness of the production method.” 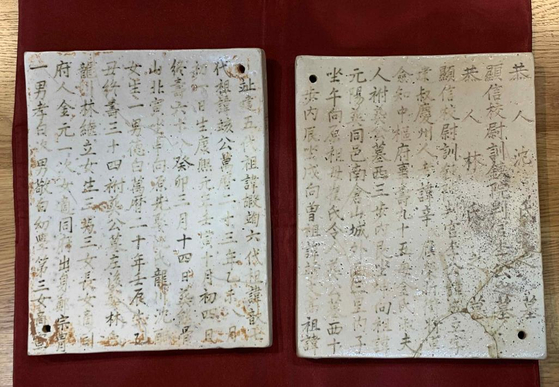 Epitaph plaques for Yi Seong-rip (1595-1662), who served as a military official during the Joseon Dynasty (1392-1910), have returned to Korea and were revealed to the public on Sept. 28. Two tablets complete the set. [CULTURAL HERITAGE ADMINISTRATION]


Iron-brown underglaze was used for the calligraphy on the two tablets. The tablets each have two holes at the top and bottom corners. Researchers at the administration said the holes were probably created to tie the tablets together face to face.

The Overseas Korean Cultural Heritage Foundation said that the Japanese collector contacted the foundation and expressed his intention to donate the tablets and have them returned to their owners.

The exact period in which the two sets of epitaph plaques were taken out of the country is unknown, but it is a widely known fact that many of Korea’s cultural artifacts were taken outside the country during the Japanese colonization (1910-45) and the Korean War (1950-53).

The collector, who wished to remain anonymous, said that he only discovered the tablets recently at an auction for cultural heritage items and purchased them to keep them safe. The foundation said the collector wished to donate them without any compensation or preconditions, stating that it is his belief to “rightfully return the epitaph plaques to Korea, where they belong.”

The Overseas Korean Cultural Heritage Foundation said it has contacted the descendants of Kim and Yi by identifying the owners of the tablets based on the information written on the artifact. After discussions, the descendants agreed to entrust the epitaph plaques to the Korean Studies Institute so that they could be used in research and exhibited to the public, instead of returning them back to the tomb site and buried.