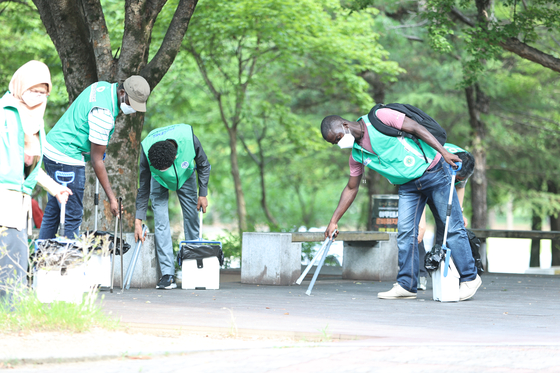 International students at the Park Chung Hee School of Policy and Saemaul pick up trash as part of the graduate school’s program mirroring the original Saemaul Movement’s traditions. [YEUNGNAM UNIVERSITY]


Ethiopia’s ambassador to Korea visited Yeungnam University to look into Korea’s Saemaul Movement and find ways to teach it at universities in his home country.

The Saemaul or New Village Movement was a community-driven development project that transformed Korea from a war-ravaged state into an economic powerhouse during the 1970s under the Park Chung Hee regime.

According to Yeungnam University, Ethiopian ambassador Dessie Dalkie visited the university in Gyeongsan, North Gyeongsang, on Oct. 7 and met with President Choi Oe-chul to ask how Ethiopian universities could teach the Saemaul Movement.

Yeungnam University, 50minutes away from former President Park’s home city of Gumi, is the only university in Korea with a major in the Saemaul Movement.

Dalkie participated in a training program on the Saemaul Movement at the university in 2015 when he was serving as governor of the Southern Nations, Nationalities, and Peoples’ Region (SNNPR) in southwestern Ethiopia.

“During the training program, I was convinced that the Saemaul Movement and the spirit of the campaign were needed in developing countries,” he said. “The Saemaul Movement needs to be revitalized in Ethiopia, which will make us prosperous.”

“Ethiopia is a strong ally that fought in the Korean War 10 years before it established diplomatic ties with Korea,” Choi said. “I will offer my best to help improve the quality of life of the people of our brother country Ethiopia.”

Yeungnam University is home to the Park Chung Hee School of Policy and Saemaul Graduate School.

Forty-three international students from 19 countries, including Malawi, Rwanda and Columbia, are studying in the grad school for the fall semester. Students must complete course work of at least 30 credits for four semesters and submit a research paper in order to get a master’s degree.

“All courses are in English,” an official from Yeungnam University said. “Admission isn’t easy — only one in three applicants are accepted.

“Understanding of President Park Chung Hee Leadership,” “Understanding of Saemaul Spirit” and “Rural Development” are some of the courses offered at the school. The study materials are published by the school itself. The graduate school publishes a monthly academic journal called “Saemaulogy.”

After the clean-up, students eat, just as Korean villagers did in the less prosperous days. The school says it sticks to this tradition to impart the Saemaul philosophies of diligence, self-help and cooperation.

The graduate school was established in 2011. Some, 724 students from 66 different nations have completed the master’s program.