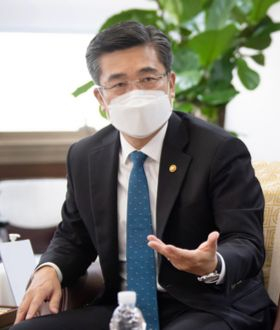 Former defense minister Suh Wook was questioned by investigators at the Seoul Central District Prosecutors’ Office on Thursday over allegations he suppressed evidence related the killing of a South Korean fisheries official by North Korean soldiers in 2020.

Suh is the first ministerial-level official to be brought in for questioning in the case, which the presidential office has accused the preceding administration of bringing to a premature conclusion for political reasons.

Lee Dae-jun, an official from the Ministry of Oceans and Fisheries, disappeared while on duty just south of Yeonpyeong Island near the Northern Limit Line (NLL), which serves as the de facto inter-Korean maritime boundary in the Yellow Sea on Sept. 22, 2020.

The next day, North Korean soldiers found Lee, fatally shot him and burned his body over fear of Covid-19, according to South Korean defense officials. The North did not report a large-scale outbreak of the virus until this past May.

Although the Korea Coast Guard initially said that Lee was killed in the process of defecting to the North to escape a gambling debt, the agency admitted at a June press conference held jointly with the Defense Ministry there was actually no evidence of that.

The reversal prompted Lee’s relatives to file criminal complaints against former security officials they deemed responsible for framing Lee’s death as a botched defection to avoid causing any trouble with Pyongyang.

Suh faces suspicions that he ordered the deletion of information obtained through the military’s surveillance stations near the NLL, thus violating the Military Secret Protection Act.

According to defense and intelligence officials who spoke on condition of anonymity to the JoongAng Ilbo, at least 40 South Korean military intelligence files detailing the events of Lee’s capture and gruesome death, including a total of seven hours of recordings of North Korean military communications, were deleted from the Military Information Management System (MIMS).

Suh’s home was raided by prosecutors in August as part of the probe into several security officials involved in the case.

Although Suh said the North bore full responsibility for Lee’s death when he was defense minister in 2020, he and his ministry were criticized at the time for categorizing the incident as a defection.

At a parliamentary audit hearing on Oct. 7, 2020, Lee told lawmakers the Defense Ministry found evidence suggesting voluntary defection after analyzing intelligence – evidence which it has since admitted did not exist.

The investigation will also look into allegations that Park Jie-won, a former head of the NIS, and his predecessor, Suh Hoon, destroyed intelligence records on the case.