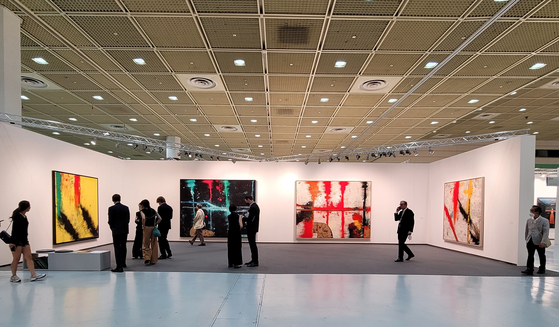 
The inaugural Seoul edition of the London-based Frieze Art Fair wrapped up on Monday. The photo above shows the solo presentation of American artist Sterling Ruby at the booth of the Brussels-based gallery Xavier Hufkens during the VIP/press preview of the art fair at COEX in Gangnam, southern Seoul, on Friday. The Belgian gallery reported that it sold all of its paintings by Ruby on the first day for prices ranging between $375,000 and $475,000.

Many other participants in Frieze Seoul also reported good performances on the first day. They include world-famous galleries that were visiting Korea for the first time, such as Swiss Hauser & Wirth, as well as Seoul-based galleries such as Kukje and Jason Haam. “The hype around the fair is justified; our expectations were very high and have been matched by our experience on the ground,” Elaine Kwok, managing partner for Asia at Hauser & Wirth, said in the first-day sales report. The Zurich-based gallery sold 14 works in the first hours of the fair, including a 2022 painting by American artist George Condo (the painting in the center of the photo below) for $2.8 million. 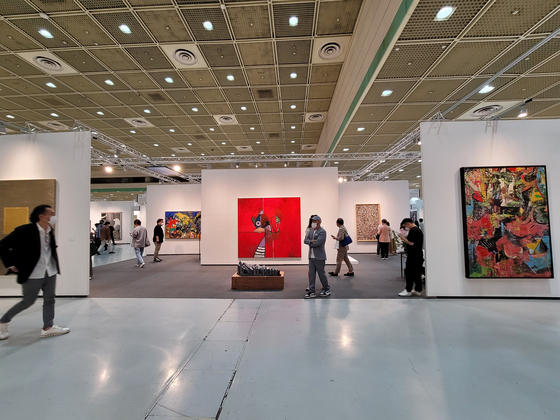 
Whereas Frieze Seoul wrapped up on Monday, the Korean art fair Kiaf, which also kicked off on Friday in partnership with Frieze Seoul, runs through Tuesday.

Takashi Murakami juxtaposes the cute with the grotesque in ‘MurakamiZombie’

Busan MoCA aims to be a ‘museum that never closes’