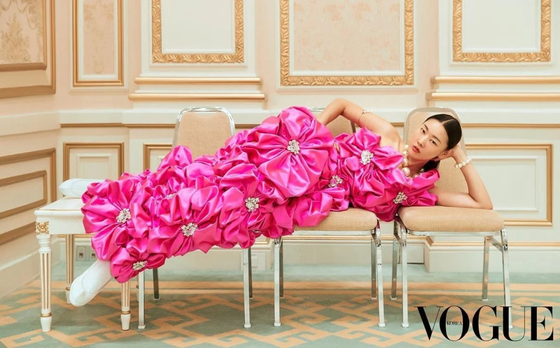 
A photograph of one of Korea’s top models Han Hye-jin, elegantly draped across some chairs in a hot pink strapless dress inside the Blue House has come under fierce criticism over the past few weeks — so much so that she decided to turn off the comments on her Instagram account on Aug. 30, nine days after the photograph went public.

What was wrong with the photograph?

To the eyes of some netizens and former liberal politicians — many things.

“How can you lie down in such an important place wearing that?” one netizen wrote underneath a news report of Vogue’s latest photoshoot. “It’s a disgrace,” another netizen wrote. “Don’t they know what they are doing lowers national dignity?”

A local media outlet reported about the issue by quoting an anonymous fashion insider who said that “the pose reminds people of a gisaeng,” a female entertainer of the Joseon Dynasty (1392-1910), the Korean equivalent of geisha.

The fashion pictorial was part of a photoshoot Han did with Vogue Korea for its September issue. She and a handful of other models took part in a shoot for a special section in the magazine, which consists of 32 photographs that “explore hanbok, or traditional Korean dress, as a fashion item that contains the present and future rather than the past.” 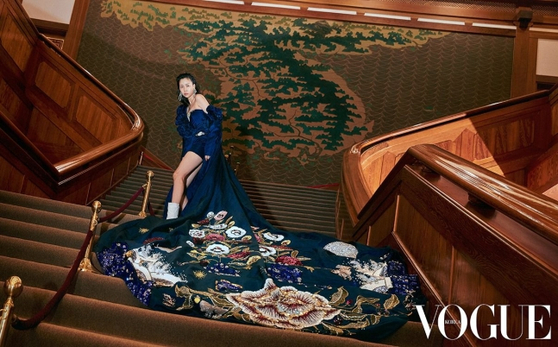 
The models in different dresses that reference traditional Korean attire took photos in various corners of the Blue House, including the state guest house known as Yeongbingwan, where Han was posing lying down. The photographs were released online on Vogue’s official website and its social media on Aug. 22 and published physically in its September issue. However, Vogue Korea deleted the photographs a few days later.

A copy of the magazine was even shown during a plenary session of the National Assembly’s culture, sports and tourism committee on Aug. 25. 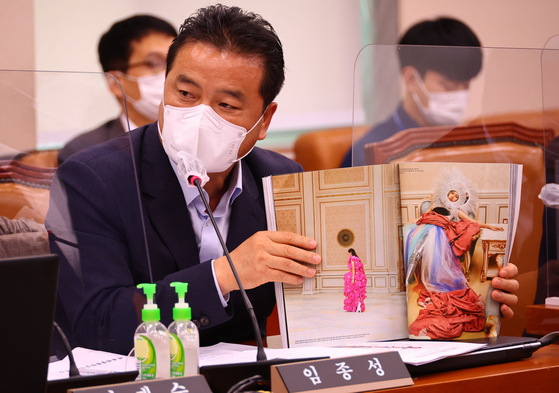 Democratic Party lawmaker Lim Jong-seong holds up a copy of Vogue magazine to question the Cultural Heritage Administration about the appropriateness of the photoshoot at the Blue House during a plenary session of the National Assembly’s culture, sports and tourism committee on Aug. 25. [NEWS1]


“Does this look like hanbok to you?” asked Democratic Party lawmaker Lim Jong-seong as he held up a copy of the magazine during the meeting. The question was to refute the Cultural Heritage Administration’s (CHA) explanation that it gave Vogue the green light for the photoshoot inside the Blue House to promote Korea’s cultural heritages — hanbok and the Blue House. The photoshoot, according to the CHA, was organized together with Vogue as part of the CHA’s annual “Visit Korean Heritage” campaign, which introduces various cultural heritages of Korea under 10 different themes.

On Aug. 23, the CHA said that it will “strictly apply standards when giving out permissions to film and utilize the Blue House so that its historical and symbolic significance can be heightened.”

The controversy, however, continued to mount to the point where the CHA decided to cancel a Gucci runway show that was planned to take place at Gyeongbok Palace in November.

According to a CHA official, the CHA and Gucci Korea originally planned to host the “Gucci Cosmogonie Fashion Show” in front of Geunjeongjeon, the hall that used to host major national events and foreign diplomats in the Joseon Dynasty, inside Gyeongbok Palace, on Nov. 1. Cosmogonie is the name of the luxury Italian fashion brand’s latest collection and about 500 people were invited to attend the show.

The CHA said it had approved the show after judging that it would be a great opportunity to show the beauty of Gyeongbok Palace to the world, but that it’s “difficult to go on with the event in this current situation.” 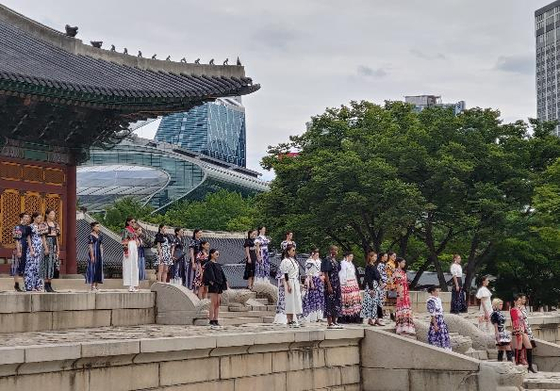 The issue of how to utilize the Blue House has been fiercely disputed especially between the ruling and the opposition parties ever since President Yoon Suk-yeol announced that he will relocate the president’s office to Yongsan in central Seoul and “give back” the Blue House, which had been used as the presidential office and residence for over seven decades and as the rear garden of the Gyeongbok Palace prior to that, to the public. The issue has now caught the attention of the public because of the Vogue photoshoot controversy.

Culture Minister Park Bo-gyoon announced in July that the government plans to turn the Blue House into a “multi-purpose cultural complex,” adding that Blue House will not be maintained merely as a historical space that was once resided in by past presidents.

Park said the ministry has four main “purposes” for the Blue House, which are: an art complex, a history museum for past presidents, a high-quality arboretum, and a cultural heritage site. The Palace of Versailles is used as an example, said Park, because it’s a successful model that has achieved all that and is loved by visitors from across the globe. 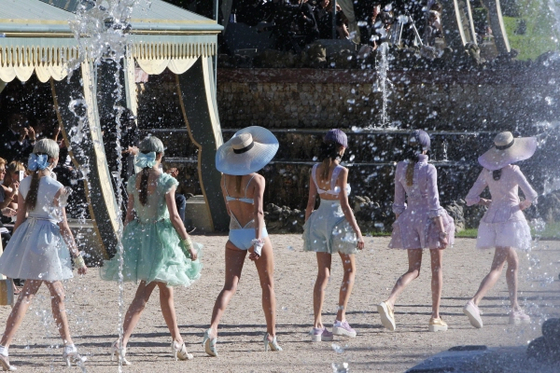 Chanel’s 2013 Cruise collection gets held at the Trois Fontaines Bosquet fountains at the Château de Versailles on May 14, 2012. [JOONGANG PHOTO]


Park’s reference to the Palace of Versailles may have more parallels to the situation at the Blue House then he even realizes.

The Palace of Versailles, or Chateau de Versailles, has been known for hosting an array of fashion shows starting with the historic Battle of Versailles in 1973, as well as organizing contemporary art exhibitions that have created some noise along the way.

One of the most striking exhibitions was Japanese artist Takashi Murakami’s cartoonish sculpture installation inside the French palace that contrasted with Versailles’ Baroque and Rococo interiors in 2010. One of Louis XIV’s descendants filed an injunction to stop the exhibit, arguing that Murakami’s bright manga-style work dishonors the memory of his ancestors and that it “denatures” French culture.

In 2008, another descendant of Louis XIV filed a complaint to shut down U.S. artist Jeff Koons’ show, but a French court dismissed the suit.

Jean-Jacques Aillagon, former president of Chateau de Versailles, said in an interview with the Korea JoongAng Daily during his visit to Seoul in 2010 that though the descendants of Louis XIV are making issues, “they have no rights about the Chateau de Versailles. It belongs to the French people.”

Aillagon was the president of Versailles until October 2011. He also served as France’s culture minister from 2002 to 2004. 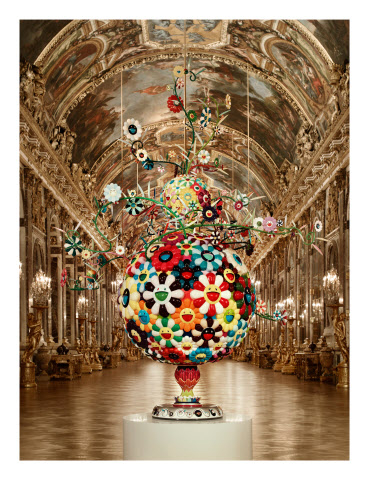 Aillagon is the one who initiated the solo exhibitions of such sensational contemporary artists like Murakami and Koons during his tenure. He said the reason for doing so was to attract more domestic visitors as well as younger generations, an aim which was successful.

“It is important that the palace, where past histories and old heritages have accumulated, can also serve as a place for new creations of our days,” he said.


When asked about what Korean authorities, who are torn between the preservation of the palaces and modern uses of them should do, he said it’s inevitable for the government to “carefully preserve [the palaces] so that the future descendants could see the cultural heritage. But they should not be a dead place or a place of the past. A living culture should be in them. Holding high-quality cultural events in the old palaces can be a way of helping them to be a living place.”

Design critic Choi Beom said that is why the Blue House, which is not even a royal palace, should not be criticized for organizing such a cultural event.

“The Blue House is not a sacred place,” he said. “I’m not saying that the site that had served as the presidential office and residence for over seven decades is not important. It has its historical significance. What I’m saying is that it’s not a sanctified ground where people should tremble for fear of hurting its dignity. It’s a cultural heritage so we should of course preserve it carefully, but utilize it actively at the same time.”

Choi said the main reason as to why there’s so much backlash over utilizing the Blue House or even the old palaces of the Joseon Dynasty is because many Koreans are “still sentimental about the Joseon Dynasty.”

“They are living in the Republic of Korea but at the same time, they seem to be reminiscing about Joseon,” he said. 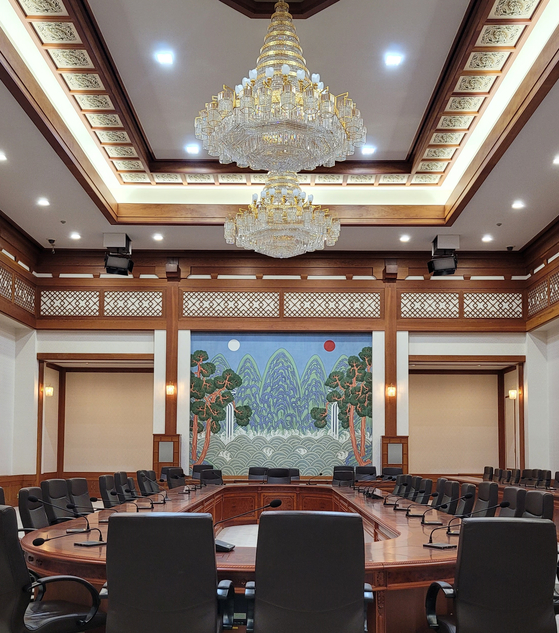 Sejong Hall inside the Blue House’s Main Office Building has a painting of ″Ilwolobongdo″ by artist Song Kyu Tae. Ilwolobongdo is the famous depiction of the sun, moon and five peaks, which symbolize power and eternity. It was placed behind the thrones of Joseon Dynasty (1392-1910) rulers. [MOON SO-YOUNG]


Just a few hours after Vogue Korea released the photographs online, former President Moon Jae-in’s protocol secretary Tak Hyun-min wrote on his Facebook, “Just as Japan turned Changgyeong Palace into a zoo, planted Sakura trees and held a nighttime opening ceremony waving cherry blossom branches, it looks like the Yoon Suk-yeol administration will probably engage in all kinds of ridiculous acts at the Blue House and Yongsan throughout his tenure.”

Choi said Tak’s comments likened the Blue House to a royal palace and a sacred ground where people should behave accordingly.
“It’s anachronism,” he said. “The Blue House or the old palaces I think are, although we don’t say it out loud, theme parks to be more direct. People should stop being so immersed in the authoritarianism and nostalgia for Joseon.”