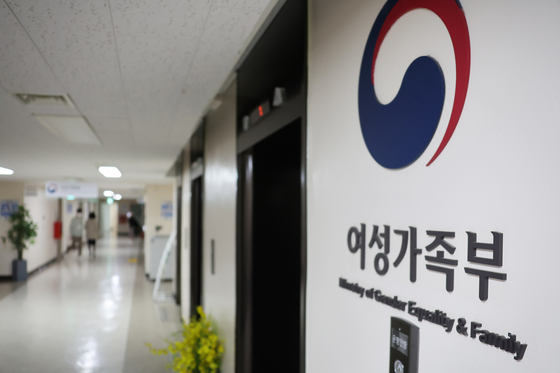 The Ministry of Gender Equality and Family [YONHAP]

The Ministry of Gender Equality and Family could be abolished or at least downsized in a plan being prepared by the Yoon Suk-yeol administration.

The Ministry of the Interior and Safety announced Wednesday that it was working on a reorganization plan that includes the abolishment of the Gender Ministry, which was a campaign promise of Yoon.

Under the plan, functions of the Gender Ministry would be transferred to a yet-to-be established organization within the Ministry of Health and Welfare, and the head of that organization would be a vice minister.

The current head of the Gender Ministry is a full Cabinet minister.

Other issues being considered in the reorganization plan, according to a source from Yoon’s People Power Party (PPP) who spoke to the JoongAng Ilbo, are the upgrading of the minister of patriots and veterans affairs to a Cabinet position and the start of two new agencies handling Korean expats and aerospace.

But none of the plans are guaranteed.

The changes require a revision to the Government Organization Act, which would require the consent of the National Assembly, which is controlled by the Democratic Party (DP).

The liberal DP vehemently opposes the abolishment of the Gender Ministry and accuses the Yoon government of using the issue to score political points with young male voters.

A DP committee dedicated to female empowerment berated the Yoon government earlier this week in a statement, blaming it for trying to get rid of the ministry to prevent its nosediving approval ratings from hitting rock bottom.

Yoon’s approval rating was 24 percent in the latest Gallup Korea poll announced in the last week of September, down from 33 percent two weeks earlier.

Vice Interior Minister Han Chang-seob briefed the DP leadership on the reorganization plan Wednesday. DP spokesperson Oh Yeong-hwan told reporters after the meeting that the party expressed its “grave concerns” about the abolishing of the Gender Ministry.

Oh said DP members who participated in the meeting told Han that relegating the head of the Gender Ministry to a vice-ministerial post could undermine the ministry’s negotiating power when discussing policies related to sexual crimes.

“Crimes against women such as the Sindang Station murder case are still a major issue in our society,” said Oh, “and the UN recommends keeping an autonomous ministry dedicated to gender equality.”

Oh said the party told Han it was fully supportive of the proposals to launch a new government agency for Korean expats and upgrade the minister of patriots and veterans affairs to the cabinet.

A PPP source told the JoongAng Ilbo on Wednesday that a bill containing the government reorganization plan was expected to be introduced to the National Assembly later this week.