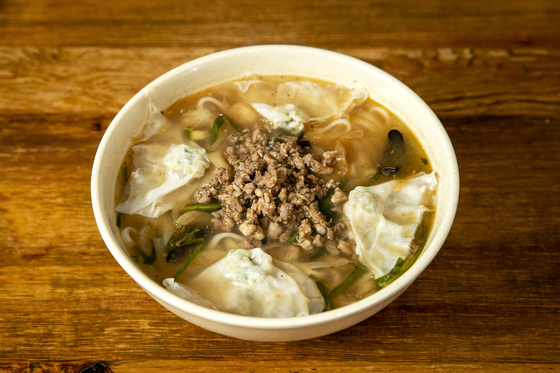 
Among the many different Korean dishes gaining popularity around the world, kalguksu is one of the most readily available options at restaurants in any city in Korea.

Kalguksu translates to knife-cut noodles: Kal is Korean for knife and guksu literally means noodles. People usually made dough for the noodles at home and then cut it into a noodle shape with a knife, hence the name. The other option — tearing chunks of dough off by hand — is called sujebi.

Kalguksu is usually made with a clear or slightly ivory-colored broth. The broth is made with chicken, clams, anchovies and beef, depending on which ingredients you have at home. Since it is relatively easy to make, it is also a common quick-and-easy option at restaurants.

One of the most popular kalguksu restaurants is Myeongdong Kyoja, located in the heart of Myeongdong’s shopping district. This restaurant, selling kalguksu and mandu (dumplings), almost always has a long line of locals and tourists waiting outside.

When The Michelin Guide released its Seoul edition, it also introduced a lot of restaurants under the kalguksu category to put the name of the particular dish on the food map among the global foodies.

Although the classic version is widely available, some of restaurants stand out by using a different broth or different ingredients to make the noodles. Below are some of the top restaurants to visit to try kalguksu in Seoul.


Classic kalguksu can be found here: A simple bowl of broth filled with noodles. But maybe save the kalguksu for the end of the night if you’re planning to spend a while here, as the restaurant is also known for other classic Korean dishes such as jeon (small pancakes) made with shrimp, oyster or cod, suyuk (steamed meat) and nakji bokkeum (stir-fried octopus with gochujang). All these dishes are often considered anju, or food to eat while drinking soju and beer.
14 Eonju-ro 148-gil, Gangnam District
(02) 544-0540 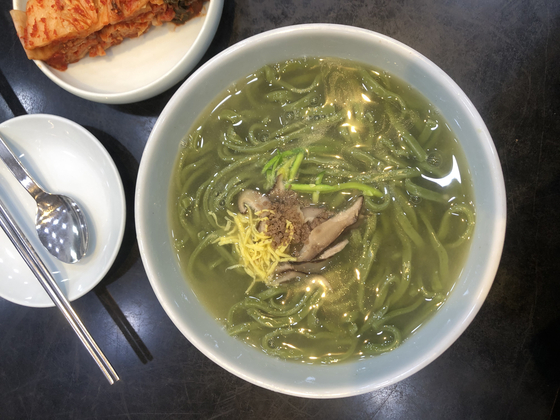 Kalguksu made with seaweed noodles at Sinsuk in southern Seoul


If you are ready to diverge from the classic style of kalguksu, try Sinsuk for its green noodles. Differing from the classical version of white flour noodles in a beef broth, Sinsuk uses seaweed powder to make it green. Most of the seafood flavors comes from the noodles and the bowl is topped with slices of cooked egg yolk and pyogo (shiitake) mushroom. Unlike most kalguksu places that serve freshly-made kimchi, this restaurant offers two different types that are more aged.
21 Beopwon-ro 3-gil, Seocho District
(02) 596-9295 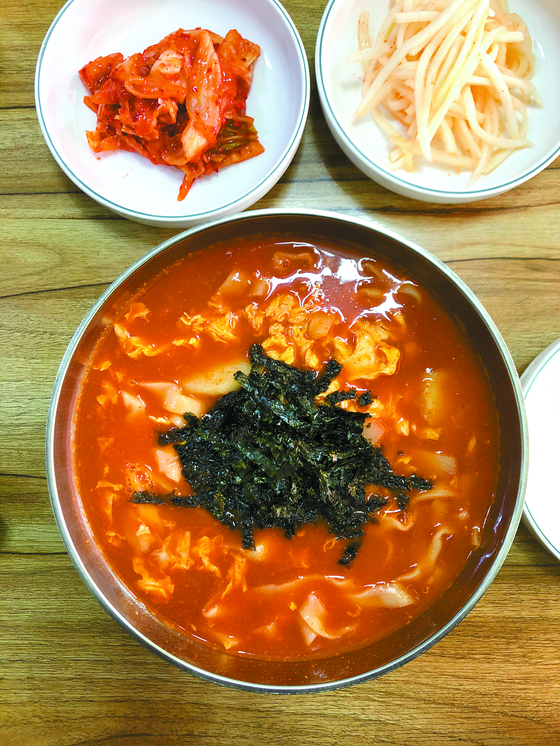 
While the classic kalguksu is made with a clear broth, some places offer a spicier version with lots of gochujang for a red broth. Here, you can choose the level of spiciness. Unlike many restaurants that use store-bought noodles, Jangkaljip really cuts its own noodles fresh in the kitchen. Its noodles are a bit wider than the ones commonly seen at other kalguksu places. Popular extras include mandu, eggs and rice balls mixed with canned tuna to make the spicy broth bearable.
3 Garak-ro 6-gil, Songpa District
(02) 420-7935 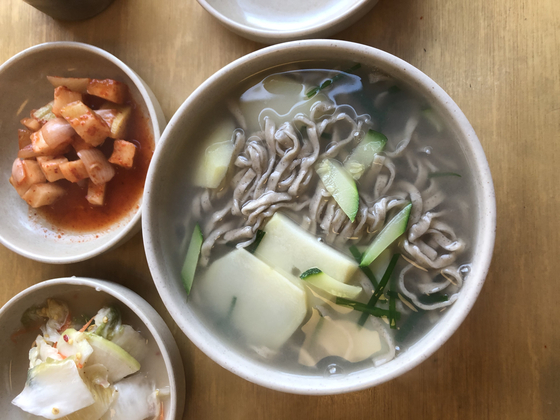 
The use of memil, or buckwheat, to make the noodles and dough for dumplings is what makes this restaurant a bit different . Buckwheat noodles are more widely used in naengmyeon, or cold noodles, but this place uses buckwheat for all its savory treats. Because of the buckwheat, the broth is slightly grey. Besides bowls of kalguksu with or without dumplings, Memilggot Pilmuryeop also offers buckwheat buchim, or buckwheat pancakes with green scallions, as well as dotorimuk, orr chunks of acorn jelly mixed with vegetables and some gochugaru (hot pepper flakes).
31-1 Hyoja-ro, Jongno District
(02) 734-0367