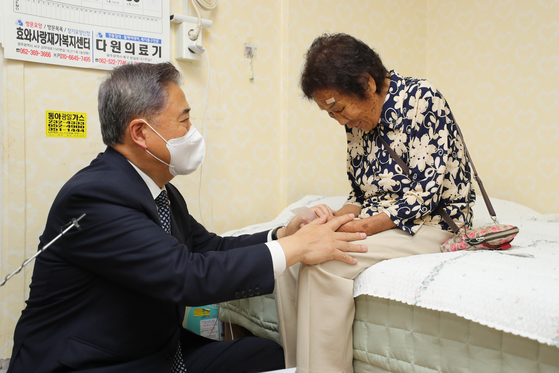 In concluding a series of meetings with civic organizations and experts to discuss Korea’s forced labor issue with Japan on Monday, the Foreign Ministry said it is well aware that forced labor victims don’t want the Korean government to step in to compensate them.

“We understand that the victims want compensation and an apology from Japanese companies […] and that they don’t want the government to step in to compensate them,” said a Foreign Ministry official in a meeting with the press on Monday evening.

The consensus reached in the meeting on Monday was that “using the government budget [to compensate the victims] was undesirable and not appropriate,” said the official.

While the government may not step in, there are other ways for a third-party organization to do so, such as a non-governmental foundation created specifically to compensate the victims, said the ministry official.

“There was some discussion in the meeting about possibly compensating the victims through such foundations,” said the official.

The issue of compensation for Koreans forced to work in Japan during World War II dates back to a landmark Korean Supreme Court ruling on Oct. 30, 2018 ordering Nippon Steel and Sumitomo Metal, renamed Nippon Steel, to pay 100 million won ($72,780) each to Korean victims of Japanese forced labor during World War II. The Supreme Court made a similar ruling on Nov. 29, 2018 against Mitsubishi Heavy Industries.

Korea’s top court acknowledged the illegality of Japan’s 1910-45 colonial rule and recognized the individuals’ rights to compensation had not expired.

Japan has protested the decisions, claiming that all compensation issues related to its colonial rule were resolved with a 1965 treaty normalizing bilateral relations.

Both Nippon Steel and Mitsubishi refused to comply with the top court’s decisions, leading to a drawn-out legal process, a move that escalated tensions between Seoul and Tokyo.

The Supreme Court in Korea has yet to rule on whether to allow the liquidation of assets of two Japanese companies to compensate forced labor victims.

Victims of forced labor who attended the first two meetings hosted by the Foreign Ministry from July 4 boycotted the latest meeting after the ministry submitted a statement to the Supreme Court on July 26 asking it to consider its recent efforts to reach a diplomatic solution on the matter with Japan, before it rules on a case of liquidating Japanese corporate assets to compensate the victims.

These efforts include discussions between Tokyo and Seoul during a visit by then-President-elect Yoon Suk-yeol’s special delegation to Tokyo in April, when an alternative option to the liquidation of assets was floated in the form of a fund which both Korean and Japanese companies would contribute to.

Some victims including Yang Geum-deok and Kim Sung-ju called the ministry’s action a betrayal and subsequently asked the court for a swift ruling on the liquidation of assets on Aug. 11.

Yang in a letter to Foreign Minister Park Jin, who visited her at her home in Gwangju last Friday, reportedly said that she only wants an “apology and compensation from Mitsubishi,” and will not take any compensation from anyone else.

The meeting on Monday, the fourth hosted by the ministry, and the second one boycotted by most victims, will be the last of its kind, said the Foreign Ministry.

It said “other forms of communication” will continue with the victims, civic organizations and experts. 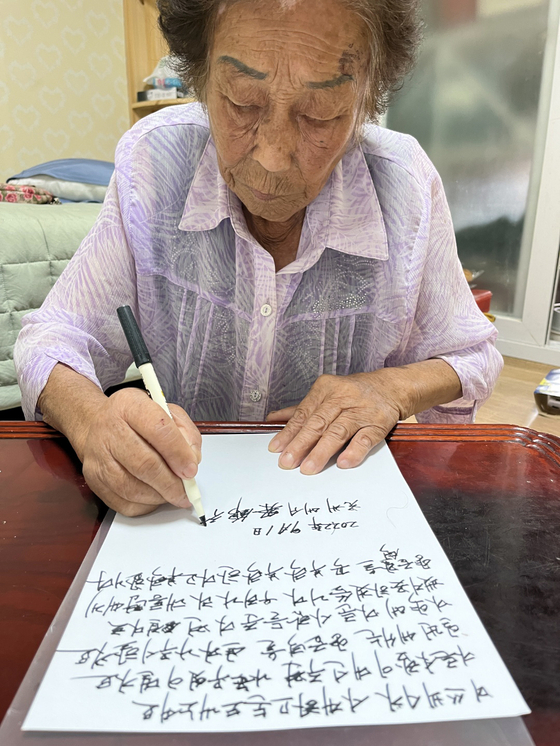 Yang writing her letter to Park on Friday. [NEWS1]