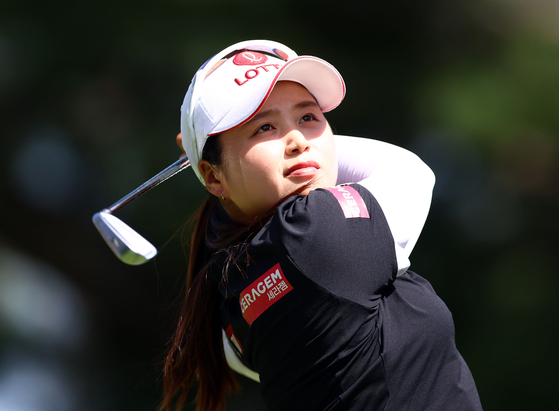 Choi Hye-jin hits her tee shot on the 13th hole during the final round of the CP Women’s Open at Ottawa Hunt and Golf Club on Sunday in Ottawa, Ontario, Canada. [AFP/YONHAP]


Four Koreans landed in the top 10 of the CP Women’s Open on Sunday as LPGA rookie Choi Hye-jin tied for second while Kim A-lim finished fifth, rookie An Na-rin tied for sixth and Kim Sei-young tied for ninth.

South African Paula Reto won her first-ever title at The Ottawa Hunt and Golf Club in Ottawa, Ontario, Canada on Sunday with 19-under-par, 265, while Nelly Korda of the United States and Choi finished one stroke behind.

For Choi, this is her first year on the Tour and her best result so far this season.

Choi only had two bogies throughout the four days, carding her first on the first day at par-3, eighth, then carding her second bogey in the first hole on moving day.

She had a bogeyless round on Friday and Sunday, but her second round performance was what put her up in the tied runner-up position after she smashed through with two eagles and four birdies.

After one bogey and six birdies on Saturday, Choi headed into the final round tied for first, but she kept quiet on Sunday until the par-3 15th when she finally pulled off her first birdie of the day.

Despite adding another in the last hole, Choi was one shy of clinching her first-ever LPGA trophy.

Choi only joined the LPGA Tour this year, after finishing tied for eighth in the LPGA Q-Series last December to join An and Hong Ye-eun in qualifying for the Tour.