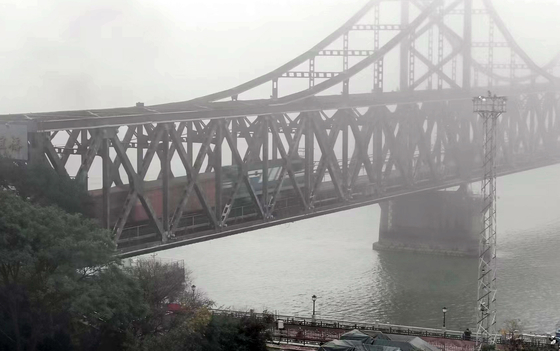 Cross-border freight trains between North Korea and China resumed Monday after a five-month hiatus, as the North tries to find some economic normalcy after a long pandemic shutdown.

A South Korean government source who spoke with the JoongAng Ilbo on the condition of anonymity Monday said a freight train was seen leaving the Chinese border city of Dandong earlier that day at around 7:43 a.m. and crossing the so-called Sino-Korean Friendship Bridge into North Korea’s city of Sinuiju.

It was the first time since April 29 that cross-border freight train services were _detected between the two neighbors.

China is North Korea’s main ally and largest economic partner, accounting for more than 90 percent of its trade volume. But two-way trade plummeted during the Covid-19 pandemic as the North had closed all its international borders to prevent the spread of the coronavirus.

For nearly two years, the North claimed it was Covid-free, though outside experts thought otherwise. The regime admitted an outbreak last May, and three months later, declared victory in its battle against it, with North Korean leader Kim Jong-un appearing in state-run media ordering an easing of restrictions.

Cho Joong-hoon, a spokesperson for Seoul’s Ministry of Unification, which handles inter-Korean ties, told local reporters in a regular briefing on Monday that neither Beijing nor Pyongyang confirmed the resumption of freight trains. But based on “several circumstances,” cargo train operations appear to be back on, Cho said.

What goods are being transferred and how long the operations will last remain to be seen, Cho added.

Freight trains between Dandong and Sinuiju had halted in late April following a Covid-19 outbreak in Dandong, nearly three months after the railway was reopened following two years of suspension.

Ahn Byung-min, chair of the North Korean Economic Forum, said it was likely that cargo trains from Dandong will be isolated near Sinuiju for some time before entering the North Korean city to be disinfected for possible virus contamination.

Some other North Korean experts believe Pyongyang was trying to get trade with China back on track before it faces even more UN sanctions following a possible seventh nuclear test.

South Korean government officials for months have said that the North completed preparations for a seventh test and was now waiting for the right moment to carry it out.

On Sunday morning, the North fired a short-range ballistic missile into waters off its east coast, the fifth missile launch since conservative South Korean President Yoon Suk-yeol was sworn into office on May 10. North Korea’s state media remained mum about the latest missile launch on Monday.