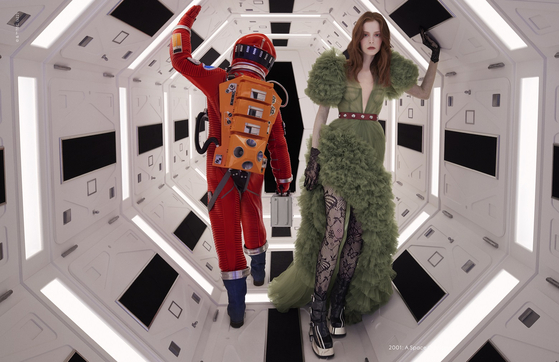 Gucci’s ″Cosmogonie″ collection celebrates the iconic works of Stanley Kubrick, with models standing in recognizable scenes from the 2001 film ″A Space Odyssey.″ [GUCCI]


Italian luxury fashion house Gucci said Thursday that it will go ahead with a runway show that was scheduled to take place at Gyeongbok Palace’s Geunjeongjeon on Nov. 1.

On Aug. 29, news reports began to circulate that the Cultural Heritage Administration (CHA) decided to withdraw its approval for Gucci to hold a fashion show at Gyeongbok Palace after public backlash over its decision to “thoughtlessly” authorize fashion magazine Vogue Korea to hold a photoshoot inside the Blue House. The Vogue photoshoot was criticized as inappropriate because of the historical significance of the Blue House, the previous home of the presidential office.

The CHA had said that it had given Gucci the green light as the show being held at the palace will help “promote the beauty of Gyeongbok Palace, which is a representative royal residence of the Joseon Dynasty [1392-1910],” however, with the recent criticism from the public, it said it would be “difficult to go on with the event in this current situation.”

However, an official from Gucci said on Thursday that it hasn’t heard anything from the CHA and that the “show is on.”

Though the CHA hasn’t made an official statement as of Thursday afternoon, an official from the administration said it “looks like that the show is back on.”

Gucci is planning to to showcase its latest collection “Gucci Cosmogonie.” The fashion label showed off the collection at Castel Del Monte in Italy’s Apulia region, a Unesco World Heritage Site in May. For the upcoming Seoul show — the first for its creative director Alesandro Michele — Gucci said it has invited about 500 guests and will be showcasing some new pieces.

“The upcoming fashion show at Gyeongbok Palace, one of the most iconic and historical places in Seoul, shows the respect Gucci has for the beauty of Korea’s cultural heritage,” Gucci said in a statement. “Gucci is working closely together with the Cultural Heritage Administration and the Cultural Properties Committee to meet the conditions suggested to hold a successful fashion show at Gyeongbok Palace.”

If the show goes ahead in front of Geunjeongjeon (the main hall at the palace), it will mark the first time for a fashion show to be held at the location, which used to host major national events during the Joseon Dynasty. There’s been hanbok, or traditional Korean dress, fashion shows organized by the government at Gyeongbok Palace in previous years, but never in front of Geunjeongjeon by a global fashion house.