Halloween was cool in Korea before it got deadly

Halloween was cool in Korea before it got deadly 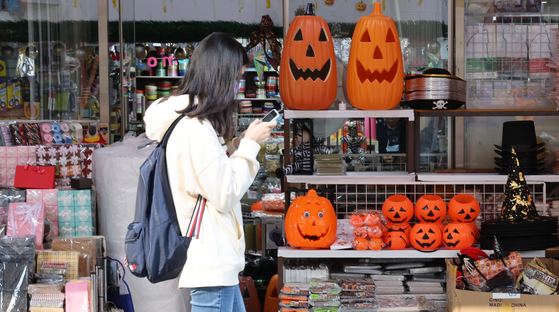 A passerby walks past a store with Halloween decorations at a traditional market in Seoul on Monday. Many businesses have discarded their Halloween-themed ads after a crowd crush claimed at least 154 lives. [YONHAP]

For many young Koreans, celebrating Halloween in the internationalized neighborhood of Itaewon is all about being cool.

“A lot of people my age want to show off how trendy they are,” said 27-year-old Mr. Kim, who asked not to be identified in this article because he was “embarrassed” about having gone to Itaewon on Halloween five years ago.

“I think they enjoy taking photos of themselves drinking at a bar with their friends and uploading the shots on their social media, just bragging how in fashion they are,” said Kim. “Some of my friends go to hook up with strangers, and I think the festive vibe of Halloween allows people to let their guard down.”

But in recent years, the holiday has grown popular among Korea’s young generation, the tech-savvy millennials and Gen Z who are sensitive to new trends and enjoy sharing their experiences on social media.

The fact that a growing number of young Koreans have lived in the United States and celebrated Halloween there before coming home, or at least learned about the tradition online or through close friends who lived abroad, seems to have helped elevate the fad, local experts say.

Bars and clubs in Itaewon – which is known for its foreign cuisine, cosmopolitan atmosphere and nightlife due mainly to its proximity to a U.S. military base – fueled the growing interest in Halloween by organizing Halloween parties and decorating their establishments with Halloween installations.

Smaller Halloween crowds have shown up in Hongade in Mapo District, western Seoul and in Gangnam District, southern Seoul, both of which are also popular destinations among young revelers out to party and drink.

Some large companies and chains have come out with Halloween special editions, such as skeleton-themed donuts or drinks with whipping cream on top shaped like ghosts.

This year’s Halloween celebration attracted more revelers, officials say, given that it was the first time in three years that visitors were allowed to take off their masks in outdoor settings.

Lee Sang-min, minister of the interior and safety, told reporters that some 130,000 people are estimated to have shown up in Itaewon on Saturday when the crowd surge happened.

“The combination of young people’s exposure to Halloween culture, their frequent use of social media and businesses who try to take advantage of all that with their marketing strategies have made Halloween festivities overheated,” said Seol Dong-hoon, a sociology professor at Jeonbuk National University.

“At a time when there hadn’t been much to do with Covid around, and now that restrictions finally eased,” Seol continued, “young people would have thought of this year’s Halloween as some sort of an exit to break free.”

Among 154 people who died in the Itaewon crush, 11 were teens and 103 people were in their 20s, accounting for 74 percent of all deaths. Of the other victims, 30 were in their 30s, eight in their 40s, one in their 50s and one whose age has yet to be confirmed.

Alland Dharmawan, an Indonesian graduate school student at Yonsei University in Seoul, said he was in Itaewon with his dad on Saturday night, nearly 30 minutes before the crowd surge turned deadly in the district’s narrow alley.

“I actually went to get food,” said Dharmawan. “We’ve long heard about how big the Halloween celebration in Itaewon is, so we decided to go and feel the atmosphere.”

Dharmawan, who wasn’t in a costume, said he was amazed by the different costumes and decorations that he saw.

“It was actually fun for us in the beginning,” he said. “I’ve never seen something like this before as Halloween is not really celebrated in Indonesia.”

But the fun didn’t last long.

“Because it was very crowded, we decided to stand in front of a bar that was elevated, so we were just standing there the whole time and looking at people passing. We were afraid to follow the crowd as it was very hard to move.”

While authorities continue to investigate who to blame for the deaths, experts say that local government offices should have at least discussed safety measures with police and firefighters, and made sure that enough police officers were on patrol in the Itaewon area.

Interior Minister Lee said about 130 police officers were dispatched to Itaewon last Saturday before the fatal crowd surge, highlighting that it was 40 percent more than the number of officers dispatched in previous years “when nothing peculiar happened.”

This year’s crowd was about 30 percent larger than that of previous years, Lee said.