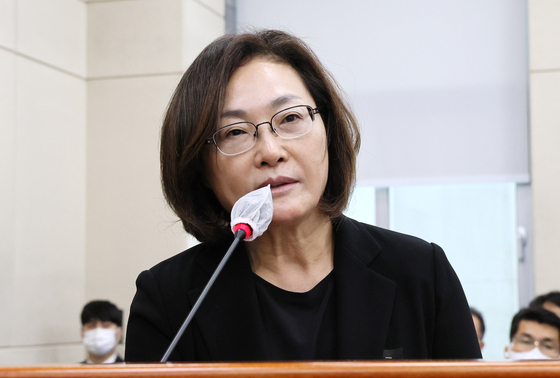 Park Hee-young, head of the Yongsan District Office, answers questions during a Public Administration and Security Committee meeting at the National Assembly in Yeouido, western Seoul, on Nov. 7, 2022. [YONHAP]


Park Hee-young, head of the Yongsan District Office, was banned Friday from leaving the country by the Ministry of Justice which immediately granted a ban requested by the Special Investigation Headquarters of the National Police Agency.

Park was placed on the cusp of the police investigation on suspicion of neglecting to prepare safety measures and accident prevention in Itaewon during the Halloween weekend and inappropriately responding to the disaster.

The Special Investigation Headquarters, which is investigating the Itaewon crowd crush, had booked Park along with five other suspects on charges of professional negligence that led to the death of 156 people on Oct. 29. Others booked by police for investigation include Yongsan Police Chief Lee Im-jae and Yongsan Fire Station Chief Choi Seong-beom.

The investigation is focusing on whether the Yongsan District Office, the local government in charge of the Itaewon area, had properly implemented safety measures ahead of Halloween.