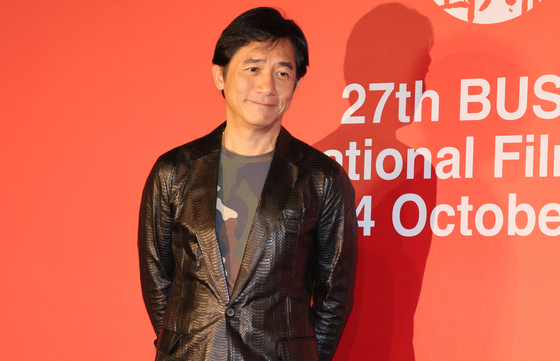 Hong Kong star Tony Leung Chiu-wai poses after the local press event at KNN Theater, Busan, on Thursday in celebration of his receiving of Asian Filmmaker of the Year award for this year’s Busan International Film Festival. [ JOONGANG ILBO]


BUSAN — Hong Kong star Tony Leung Chiu-wai says he would like to to star in a Korean production “if given the opportunity.”

The actor came to Busan to attend this year’s Busan International Film Festival (BIFF), where he received the Asian Filmmaker of the Year award on the red carpet of the opening ceremony Wednesday. The award is granted to an Asian cineaste who made a significant contribution to the advancement of Asian film industry and culture in the last year.

“I personally love works by actors Song Kang-ho and Jeon Do-yeon,” he said, referring to the two actors who received the Best Actor and Best Actress Award at the 2022 and 2007 Cannes Film Festival. “So if given the chance, I would love to work with them. […] But I believe the biggest problem [in starring in Korean content] is the language barrier. If that can be resolved somehow, I’m always up for the challenge.”

Leung is no stranger to BIFF. This is his fourth time to attend the film fest since he first visited for the second edition of the festival in 1997. His last visit was in 2004 with “2046,” which was the opening film of the festival.

“It’s been a while since I attended a red carpet event [because of the Covid-19 pandemic],” he said. “I enjoyed it because I could vividly feel the passion of BIFF fans. It also reminded me of the time I first attended the festival. Back then, the road was very narrow, and they had installed a small stage next to it. Even when I was going to a theater, the fans all crowded near the road. I once had my shoe slip off because the fans were so passionate.”

The festival asked the actor to choose six of his most iconic films for the special BIFF showcase “In the Mood for Tony Leung.” It wasn’t an easy choice for the actor, who has some 80 films under his belt throughout his 40-year career since he debuted through the Hong Kong drama series “Soldier of Fortune” in 1982.

The 60-year-old actor also gained recognition among the younger generations through his role in Marvel film “Shang-Chi and the Legend of the Ten Rings” (2021), where he portrays the villain and the father of the protagonist Shang-Chi, portrayed by Simu Liu.

“I was happy to pull off the role of a father, which I don’t think I would have dared to challenge myself to 10 years ago. For me, I think that during the first 20 years as an actor, I was in the process of learning, and the latter 20 years was about demonstrating what I’ve learned. But now, I think I [even] surpassed that. Now, I believe I’m in the stage where I can truly enjoy my profession without feeling too stressed about it, and I hope to continue to pull off a variety of roles which I hadn’t done in the future.”

The actor hinted that he wants to play the role of a serial killer one day.

“I talked about this with director Philip Yung from my prior 2013 film ‘Where the Wind Blows,’” he said. “I asked him to write a script about a serial killer and, hopefully, I could star in it.”

Leung says that despite his 40-year career, he does not have any plans to expand his horizons by working behind the camera.

“I’m still enjoying being an actor,” he said. “I still have a lot of plans to work as an actor, maybe for a few more years. I don’t have any plans to be a director or a producer in the meantime.”

Leung hopes to visit Korea more often in the future.

“I hadn’t had many opportunities to visit Korea because of the pandemic,” he said. “I would love to visit Korea more frequently now and meet more people.”