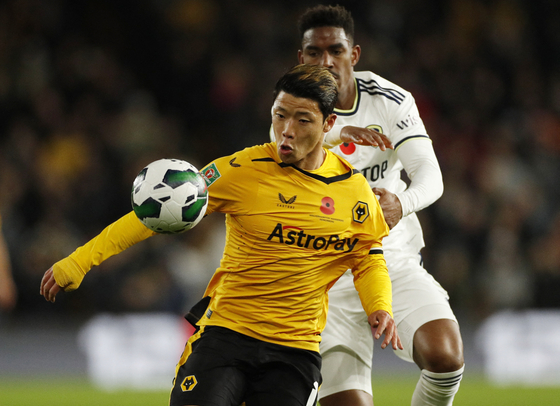 Wolverhampton Wanderers’ Hwang Hee-chan in action with Leeds United’s Junior Firpo during a Carabao Cup third round game at Molineux in Wolverhampton, England on Wednesday. [REUTERS/YONHAP]


Hwang Hee-chan played the full 90 minutes as Wolverhampton Wanderers beat Leeds United 1-0 in the third round of Carabao Cup on Wednesday, marking the Korean forward’s first complete game this season.

Wolves’ win carries them through to the round of 16 at the EFL Cup, an encouraging result for a team that has won just two league games this season and sits firmly in relegation territory.

The win came from a late strike by substitute Boubacar Traore, the 21-year-old’s first goal for Wolves since joining the English club on loan from Ligue 2 side Metz in September. It was a solid effort, fired into the roof of the net from the edge of the box in the 85th minute, with Daniel Podence providing the assist.

The win comes as both good news for caretaker boss Steve Davis and incoming manager Julen Lopetegui, set to take the helm of the struggling club next Monday.

Hwang played the full 90 minutes for the first time this season in what may well prove to have been a particularly important game for him to perform well, with Leeds reportedly interested in signing him in January.

Wolves reportedly turned down a £17 million ($20 million) offer for Hwang a day before the transfer window closed, ensuring the struggling Korean midfielder stays with the club for the foreseeable future.

Hwang, who was on loan with Wolves last season, signed a four-year contract with the club in January that officially went into effect this summer, said to be valued at between £11.9 million and £14 million ($19 million and $22 million).

But Hwang has also been struggling in front of goal with the midlands club. He has failed to score for Wolves for since Feb. 24, a huge dry spell that now encompasses 26 games.

Leeds United emerged as a possible transfer contender near the end of the transfer window as manager Jesse Marsch made it clear he was interested in being reunited with Hwang.

Marsch was appointed as manager of Red Bull Salzburg in 2019, leading the team to win the double in his first season. Hwang was one of the three stars of Marsch’s attacking line, alongside Erling Haaland, now at Manchester City, and Takumi Minamino of Monaco.

Leeds reportedly offered Wolves £17 million earlier this week in a bid to bring Hwang back under Marsch’s leadership and potentially bring back some of that 2019 form. The deal was rejected, with Wolves manager Bruno Lage maintaining that Hwang is an important part of his squad.

But some reports suggest there are more economic reasons that Wolves rejected the deal — possibly because Leeds were looking a loan-to-buy deal and Wolves want an immediate sale.