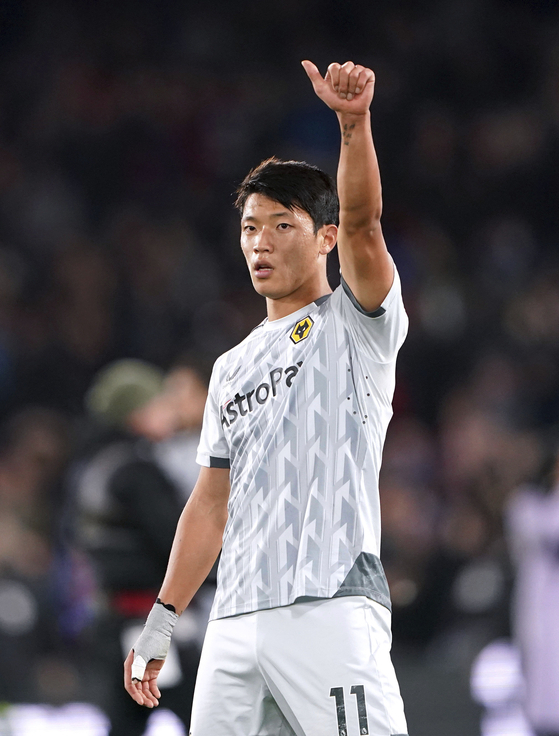 Wolverhampton Wanderers’ Hwang Hee-chan gestures to the fans at the end of a Premier League match against Crystal Palace at Selhurst Park in London on Tuesday. [AP/YONHAP]


Hwang Hee-chan made an unremarkable 15-minute appearance as Wolverhampton Wanderers lost 2-1 to Crystal Palace on Tuesday, adding yet another disappointing result to a terrible season for both player and team.

Wolves took an early lead in the 31st minute on the road at Selhurst Park Stadium in London with a goal from Adama Traore.

Eberechi Eze equalized for Palace after the break, with Wilfried Zaha adding number two in the 70th minute.

Hwang’s 15 minutes came at the end of the game, five minutes after Zaha’s goal when the score was all but decided. During that time he barely saw any of the ball and had few opportunities to connect with his teammates.

The short and ineffectual outing on Tuesday is increasingly familiar territory for Hwang, who has only played more than 30 minutes in three Premier League games so far this season. The relegation to the bench comes in the midst of a 22-game scoreless streak in league appearances with little sign of anything changing anytime soon. 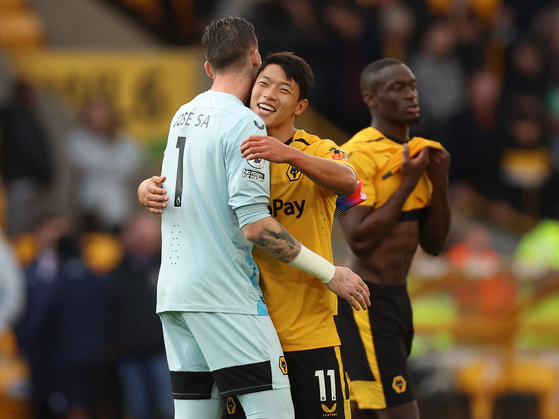 Wolverhampton Wanderers’ Jose Sa and Hwang Hee-chan celebrate after winning a match against Nottingham Forest at Molineux Stadium in Wolverhampton on Oct. 15. [REUTERS/YONHAP]


Hwang made an even briefer appearance against Nottingham Forest on Saturday.

In that game — a rare win for Wolves this season — Hwang was on the pitch for a token eight minutes, adding little to a victory that had already been incredibly hard work against the second-from-last team in the Premier League.

Hwang saw a bit more action against Chelsea a week earlier, his only other appearance since the mid-September international break, playing 33 minutes in a 3-0 loss and again achieving very little.

Hwang’s arrival at Wolves last season, initially on loan and then later as a signee, made him the second Korean player currently active in the Premier League, alongside Tottenham Hotspur’s Son Heung-min. 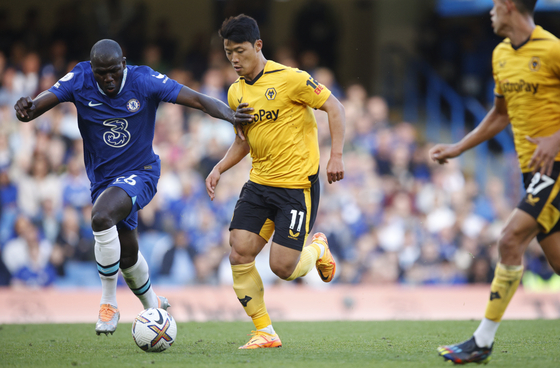 
Hwang started his Premier League career well, scoring four times in his first six appearances, but his performance dropped off about a year ago and he has only managed one goal since then, on Feb. 24.

Hwang last found the back of the net on Feb. 24, scoring his fifth goal of his debut Premier League season against Arsenal.

The ongoing dry spell had made Hwang look like potential transfer window fodder, with rumors connecting him to both Leeds, where he could have reunited with former manager Jesse Marsch, Everton and Roma. Wolves reportedly turned down a £17 million ($20 million) offer for Hwang before the window closed last week, with Bruno Lage, the club’s manager at the time, maintaining that he is a crucial member of the team.

Lage was sacked on Oct. 2 and is yet to be replaced. His time at the helm at Molineux started off well, with Wolves at one point reaching sixth in the Premier League, but dropped off suddenly, with just seven wins in 28 games so far this year.

The club is currently being led by coaches Steve Davis and James Collins until a new manager can be appointed.

The jury is still out on whether Lage’s departure is likely to be good or bad news for Hwang.

The rapid decline in Hwang’s performance shortly after joining Wolves suggests that Lage’s management style did not work for him, although whether another manager would be able to stop that freefall is unclear.

At the same time, Lage is seen by some punters as having sheltered Hwang throughout his slump, insisting that the Korean forward would be back on form soon and keeping him in the squad far more than he deserved.

Hwang himself insists he had a good relationship with Lage.

“I learned so much from him whilst he was here,” he told Wolves.co.uk in an interview on Oct. 11. “I had a very good time with him. Towards the end of his tenure, I could’ve felt disappointed, but I still learned a lot from him and he helped our team as a whole. I’m thankful that he always motivated us to be better.”

While Hwang and the rest of the Wolves squad wait to see who ends up managing the club, there are rumors that Leeds are already preparing to bid for him again in the January transfer window. With the disappointment piling up for both Hwang and the club, the change of scene may be an increasingly attractive option.

For now, though, Hwang says his focus is on getting back on the pitch.

“I’m focusing on things that I can do,” Hwang said. “Even in a situation like this, I have belief in myself. I’m trying my best to improve things that I may be lacking. I believe that I can be better.

“I know that I have more to show. My strongest desire now is to be grateful to have come back from the injury, to work hard in training and show what I’m capable of when I’m on the pitch.”