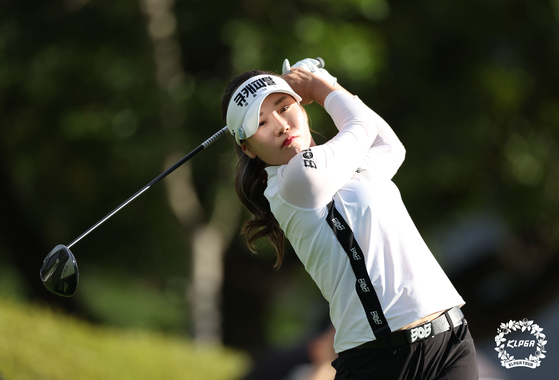 Hwang Jeong-mee hits a tee shot on the 10th hole during the second round of the 11th KG Edaily Ladies Open in Yongin, Gyeonggi on Saturday. [NEWS1]

Hwang and Kim finished tied for first on 14 under, 202, over three rounds at Sunning Point, with Hwang capitalizing on a phenomenal outing on Saturday to tie the score and ultimately take the title.

Kim, who won her first-ever title at the KG Edaily Ladies Open last year, started off strong on Friday, taking the lead with six under, 66. Hwang, meanwhile, had a terrible round, hitting a triple bogey on the par-4 sixth to tie for 35th on one under, 71.

But Hwang fought back with a vengeance on Saturday, hitting 10 birdies on a bogeyless round for a huge 62 to jump up to first place. Kim dropped down to second place with a four under, 68, for a total score of 134, one more than Hwang’s 133.

Kim leveled the score on Sunday with another 68, while Hwang was unable to repeat Saturday’s magic and ended with a three under, 69.

The two advanced to a playoff hole, with Hwang taking the trophy, four to five.

Despite failing to defend her title, Kim finished the tournament with only two bogeys across all three rounds, one each on Friday and Saturday, and an eagle to her name on Sunday on the par-5 14th.

The KLPGA will now break for a week due to the Elcru-TV Chosun Pro Celebrity being canceled.

Last year’s Elcru-TV Chosun Pro Celebrity was the inaugural event, the pro-celebrity format being a new initiative for the Tour. Unlike other pro-am tournaments, only the KLPGA golfers played the first two rounds, then the top 60 golfers who made the cut were joined by amateur celebrity golfers.

However, the second edition that was scheduled to be held from Sep. 9 to Sep. 12 at Orange Dunes Golf Club in Yeongjong Island, Incheon will not be held this year.

It was announced last week that the sponsor of the event, DSME Construction, was unable to book the golf course for the competition due to financial problems and will owe the KLPGA Tour 75 percent of the purse as a penalty for breach of contract. Elcru-TV Chosun Pro Celebrity had at the start of this season increased its purse from 600 million won to 700 million won.