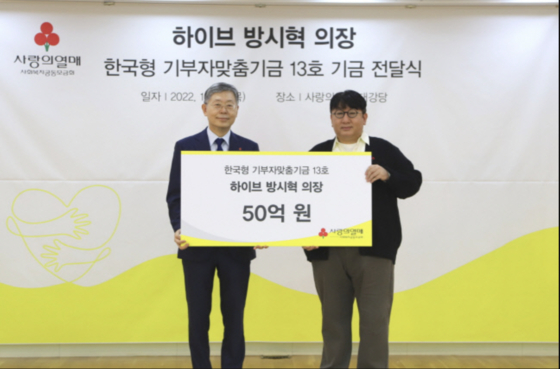 Bang Si-hyuk donated 5 billion won ($3.5 million) to the Community Chest of Korea, according to the organization on Thursday. [COMMUNITY CHEST OF KOREA]

Through his donation, Bang became the 13th member of the Korea Donor Advised Fund.

The program is designed to help contributing donors enjoy the benefit of running a non-profit foundation without creating one, allowing them to be fully operative and customize projects to reflect the donors’ wishes on how their donations are put to use.

Bang’s donation will go toward education for underaged youths who cannot afford to go to school.

Bang attended a ceremony at a building of the Community Chest of Korea in central Seoul on Thursday for his donation.

“I’ve learned that varieties of social support that I myself have received helped me to establish myself as a music creator and an entrepreneur,” Bang said. “I made this donation with the thought that I want to contribute what I can to this society and, during the process, thought about what kind of help the younger generations would need to develop into leading members of society. I give this donation in the hopes that it can help young people in need achieve their dreams.”