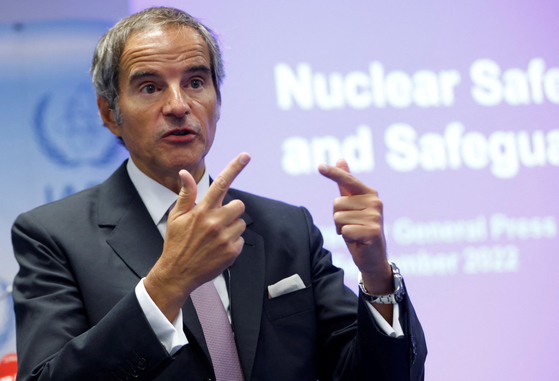 
The head of the International Atomic Energy Agency (IAEA) expressed alarm over signs that North Korea is conducting uranium enrichment at the Yongbyon nuclear facility and continuing construction work on two tunnels at its Punggye-ri nuclear testing site.

In an opening address to a session of the IAEA Board of Governors in Vienna, Austria on Monday, Director General Rafael Grossi said there are continuing indications that the 5-megawatt reactor at the Yongbyon nuclear complex in North Pyongan Province is currently in operation.

The IAEA reported in August last year that the reactor had been restarted.

Yongbyon’s 5-megawatt reactor has long been the focal point of international diplomatic efforts to rein in North Korea’s nuclear ambitions. The reactor is believed to be the regime’s sole source of spent nuclear fuel for reprocessing and is capable of producing six kilograms of weapons-grade plutonium from spent fuel rods per year.

Grossi informed the session that the agency believes the expansion of the centrifuge enrichment facility at Yongbyon is complete, increasing the building’s available floor space by approximately one-third.

He noted signs that Tunnel No. 3 at the Punggye-ri nuclear test site in mountainous North Hamgyong Province has been reopened and is prepared for a test.

According to Grossi, the agency has also very recently observed renewed work on the road leading to Tunnel No. 4 and called the site’s reopening “deeply troubling.”

The restoration of both tunnels at Punggye-ri raises the specter of more than one nuclear test.

Satellite photography of Punggye-ri taken within the past year shows North Korea has worked to restore access to the underground test site, which was ostensibly demolished in May 2018, when North Korea detonated all four tunnels in a much-publicized event witnessed by foreign media allowed into the country.

“The continuation of the DPRK’s nuclear program is a clear violation of relevant UN Security Council resolutions and is deeply regrettable,” Grossi said, referring to the North by the acronym for its official name, the Democratic People’s Republic of Korea.

The IAEA chief called upon Pyongyang “to comply fully with its obligations under relevant [United Nations] Security Council resolutions” and allow IAEA inspectors back into the country.

Pyongyang expelled the agency’s inspectors from Yongbyon in 2009 and has since refused IAEA inspections, forcing the watchdog to monitor the regime’s nuclear activities through open source information and satellite imagery.

Since 2006, the Security Council has passed nine resolutions sanctioning or condemning North Korea for its missile and nuclear weapons program.

The sanctions target not only the North’s ability to trade weapons, military equipment, and technology, but also its main metal, agricultural and labor exports as well as the import of luxury goods and oil.

But the most recent attempt to sanction North Korea for a series of missile tests that began early this year failed after China and Russia vetoed a U.S.-drafted resolution in May that targeted tobacco and oil imports into North Korea.