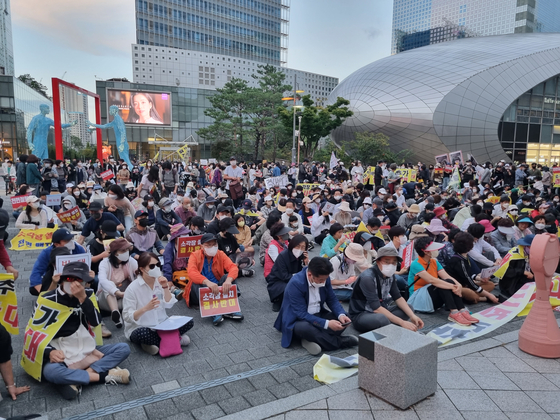 
More than 500 residents of Mapo District in western Seoul gathered in front of the district office last Saturday afternoon to protest a city government plan to build a second waste incinerator in their neighborhood.

They held picket signs reading, “No to another incinerator,” “Save Mapo” and “Full withdrawal.”

From young married couples with children in strollers to elderly people with bent backs, participants demanded to see district head Park Kang-soo, and complained that he isn’t responding to their ire.

Protestors also marched in Mapo’s Sangam-dong area — the site of the waste incineration plant — for about an hour.

People in that part of Mapo-gu were stunned at the Seoul Metropolitan Government’s announcement on Aug. 31 that it would build a new resource recovery facility — its polite name for a garbage incinerator — on a parking lot near an existing incinerator.

Construction is supposed to be completed by the end of 2026 and operations will begin in 2027.

The existing plant will be demolished in 2035 and be converted into a park.

The main issue raised at the rally was “equity.”

“Mapo District already incinerates 750 tons of municipal waste daily [generated by five districts of Seoul], and it is unfair that 1,000 more tons of waste will be brought in,” said 44-year-old Mr. Myeong at Saturday’s protest.

Myeong, a father of an elementary school student, added, “I moved to Sangam-dong for my child because the area has a lot of greenery and is eco-friendly, but if another plant is built, I will move out.”

“I can still smell ash when I open the window in the morning,” said Yoon Seon-yeong, who lives 900 meters away from the Mapo facility. “I don’t even want to imagine another 1,000 tons of waste being burned.”

The 48-year-old resident added, “The amount of garbage would be reduced if each district was made to handle their own waste.”

The city government says that the Sangam-dong area was selected because there are no residences within 300 meters of the incinerator, and no new land had to be acquired. Heat energy from incineration will also be used for heating for nearby neighborhoods.

From 2026, a ban on burying municipal waste in landfills in the greater capital region will go into effect. This means that Seoul needs a new incinerator to take care of its waste.

In 2019, the city attempted to find a site for an incineration plant, but failed as none of its 25 districts voluntarily applied. Eventually, a Site Selection Committee was formed in March 2021.

For the new Sangam-dong plant, the city promised to build the plant and access roads underground, introduce a high-quality pollution control system and apply cutting-edge technology like artificial intelligence (AI) and Internet of Things (IoT) technology.

It is also giving incentives to neighbors. It will invest about 100 billion won ($74.4 million) to bring in facilities like a library or an indoor gymnasium, while offering an annual supporting fund of 10 billion won to be used for residents’ welfare, including apartment management and heating bills.

Seoul said it will make the new incinerator attractive in design, eventually making it a city landmark like Denmark’s Amager Bakke, a waste incinerator with a ski slope and a climbing wall.

That wasn’t enough to convince the angry neighbors. They said the site selection process was opaque.

Byeon Haeng-cheol, who heads a group demanding the complete withdrawal of the incinerator plan, said, “The scoring in the evaluation standards was skewed towards the Sangam site,” and raised questions over the site selection committee having held meetings several times when a quorum wasn’t reached.

The city government objected to questions about the composition of committee members.

Through a press release on Tuesday, it explained that seven out of the ten members were recommended by the previous city council, when the Democratic Party (DP) — now the opposition party — controlled a majority of the seats.

According to the city government, Mayor Oh Se-hoon had a first face-to-face meeting with residents on Monday afternoon after some residents went to his house in Gwangjin District to demand the withdrawal of the plan. After the meeting, the city decided to postpone a presentation for residents that was scheduled on Oct. 5.

“City officials and myself are prepared to meet and talk to the residents not a hundred times but a thousand times,” Mayor Oh wrote in a Facebook post on Tuesday.

“It is time for a decision for the public good of all Seoul citizens,” Oh said. “The corresponding benefits will be sufficiently provided. I will make every effort for residents not to worry at least about their health.”

U.S. couple that took in Korean tourists invited to Korea