Incentives for people who get Covid booster shots

Incentives for people who get Covid booster shots 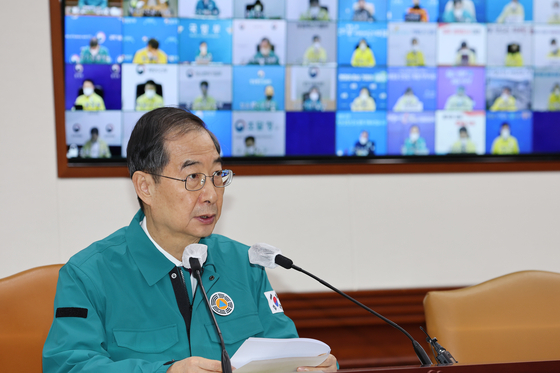 Prime Minister Han Duck-soo presides over a meeting at the Central Disaster and Safety Countermeasure Headquarters on Wednesday. [YONHAP]


With Covid-19 cases on the rise, Korea is offering incentives for people to get booster vaccine shots.

“As the winter wave of Covid-19 is in full swing, major pandemic indicators such as the numbers of confirmed patients, critical or severely-ill cases, and fatalities are all worsening,” said Peck Kyong-ran, commissioner of the Korea Disease Control and Prevention Agency (KDCA) in a press briefing on Wednesday.

The number of critically- or seriously-ill patients in hospitalization was 411, staying in the 400s for the third day in a row.

Forty-seven more people died of the virus overnight, an increase of eight from the previous day. The death toll was raised to 29,759.

The daily average of new Covid-19 cases in the second week of November was 49,126, an increase of 15.8 percent from the previous week.

The KDCA declared Wednesday that the peak of the seventh wave, or the winter wave, will be reached after December, with around 20,000 cases a day, based on their mathematical modeling.

The KDCA commissioner called for “as many people as possible to be vaccinated with the most suitable vaccine now.”

“The government designated four weeks from Nov. 21 as an ‘intensive vaccination period’ for additional boosters for the winter season,” Peck said.

“During this period, we will have 50 percent of the elderly group aged 60 or older as well as 60 percent of residents and employees of facilities at high risk of Covid vaccinated,” she declared.

From Nov. 21 through Dec. 18, people will be able to receive a vaccine shot at medical clinics without having to make a reservation.

The government promised incentives to get the jabs.

Those who get boosters will be eligible for discounts on temple stays and free admission to Korean palaces and royal tombs.

Local governments and facilities vulnerable to virus infection like nursing homes with high vaccination rates will also get benefits such as subsidies.

“The preventive effect of a bivalent vaccine is 1.6 to 2.6 times higher than the old ones,” Han added.