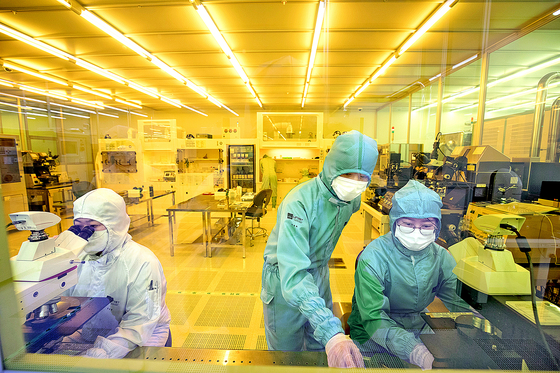 Consumer science major Lee Hye-won never knew she had to study computer coding. The Sungkyunkwan University student was told it was an essential skill nowadays to land a job in marketing, her desired industry.

Lee couldn’t find coding on her course curriculum. That didn’t surprise her.

But luckily, she was able to join a so-called Digital Transformation program provided by her university for students in humanities and social sciences, which had free coding classes.

“The coding terminology was all new to me at first so it wasn’t easy, but I got used to it,” said Lee. “I’m hoping to get a coding certificate based on what I’ve learned throughout the program.”

Digital Transformation is just one among numerous initiatives run by Sungkyunkwan University to help its students improve their career prospects after graduation, an effort that the school believes helped raise its student employment rate.

Unlike employment rates, pure employment rates do not take into account students who are in the military serving their mandatory service or those who go on to study at postgraduate schools.

The pure employment rate was one of 33 categories across four major areas that the JoongAng Ilbo used for its university rankings this year.

In the JoongAng Ilbo’s comprehensive assessment, which took into account all 33 categories and looked at 45 four-year comprehensive universities across the nation that offer degrees in at least four of six major fields — humanities, social sciences, natural sciences, engineering, medicine and arts and physical education — all top 10 schools were located in Seoul.

Dongguk University, which had the seventh-highest pure employment rate for its humanities students and ranked eighth on the JoongAng Ilbo’s humanities assessment, attributed the high scores to its “virtual mentoring” program, which links its graduates working at 55 major companies with undergraduates hoping to find employment at those businesses.

More than 3,500 students have joined the program to date, said the school.

In September, the university invited over 300 companies to its job fair and saw some 2,700 students attend to receive employment consultations.

Unist in Ulsan scored high on the JoongAng Ilbo’s natural sciences and engineering rankings thanks largely to faculty research. Research conducted in its so-called UNIST Nano Fabrication Cleanroom has been published in numerous journals, including a paper by Shin Hyeon-suk, a chemistry professor whose team developed a new material that’s expected to pave the way for miniaturizing semiconductors.

Postech, which ranked first in industrial cooperation revenues per science and technology professor, has joint research centers with various companies and uses corporate sponsorships to fund student research. Plask, an AI motion capture tool developed by a Postech computer engineering undergraduate in 2020, was showcased at this year’s CES and funded by Naver and Smilegate Investment.

GIST in Gwangju received top marks in the area of educational environment in engineering and natural sciences, due in part to the fact that all its freshmen receive state scholarships. Undergraduate students in other grades have nearly two-thirds of their tuition covered by scholarships.

[FOOD COURT] The best places to eat near Korea University