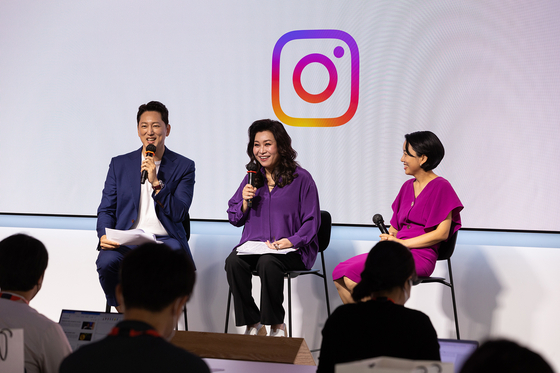 
Instagram launched Family Center on Wednesday, a tool for parents and guardians to monitor teenagers’ social media usage. The social media platform explained its functions during a press conference the same day at the Meta Seoul office in Gangnam District, southern Seoul.

The new function requires agreement from both the parent or guardian and the underage user, between ages 14 and 18. The teen is given the choice to reject the request from their parent.

After mutual acceptance, parents can monitor how much time their teen spends on Instagram and set a limit. They can also see which users the teen follows and who follows them. When the teen user reports a post, comment or message that includes cyber bullying, inappropriate advances or related elements, the report is also relayed to the parent. The monitoring adult must be over 19 years old. The Family Center function automatically ceases when the user turns 19, based on the age input to create the user’s profile.

Instagram currently requires its users to be at least 14 years old. However, due to many cases of younger users signing up with false profiles and lying about their age, Instagram has been using artificial intelligence and machine learning to delete accounts of users who are actually under 14, said Instagram Korea’s head of communications, Danielle Chong.

Instagram accounts of users under 16 are also set as private by default. Direct messages between adults and underage users are limited.

Since Family Center requires permission from teen users in order to work, this can prove to be a hurdle for parents from the outset. Star physiatrist Oh Eun-young, known for making appearances on parenting shows, and announcer Han Suk-joon attended the conference as panel members to discuss how parents can encourage their teens to use Family Center together.

“Kids today are digital natives,” said Oh. “They’ve been exposed to social media since birth, and it’s realistically impossible to separate social media from their everyday lives. But parents usually react negatively when they see their children start using social media and try to stop them from using it, which only leads to conflict and the child tends to shut down. Then they don’t think of their parents as someone with whom they can share their problems.”

“Growing kids are still learning how to process information they see online, and at the same time seek approval from others to find their self-worth,” Oh continued. “This can expose them to violent content, sexual predation or encourage unhealthy behavior such as self-harm. It’s important that teens come to their parents to share concerns like this, and parents approach their kids with an attitude for conversation, not scolding and patronizing. The same goes for agreeing on a time limit on Instagram use.”

“As a father of a young child, I’m glad there are pre-emptive measures being taken before even more serious problems come up,” said Han.

Tutorials on how to use Family Center’s functions are available at familycenter.instagram.com.