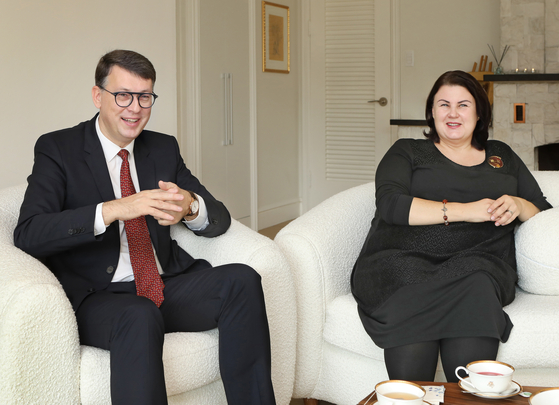 Ricardas Slepavicius, ambassador of Lithuania to Korea, left, and his wife Daiva Slepaviciene speak with the Korea JoongAng Daily at their residence in Seoul on Friday. [PARK SANG-MOON]

There are a few things about Korea that become immediately evident for newcomers to the country, including diplomats from Lithuania, which opened an embassy in Seoul just last year.

“When you’re lost, and sometimes even before you realize you’re lost, the locals recognize it first and come to you with directions,” said Ricardas Slepavicius, ambassador of Lithuania to Korea, a month into his new job in Seoul.

As helpful as Koreans have been in helping Slepavicius and his wife, Daiva Slepaviciene, find their bearings in Seoul, the locals appear rather lost if asked to locate Lithuania on a map.

“’Where is it?’ – that’s been the most frequent question we’d get after we introduce ourselves and say we’re from Lithuania,” said Slepaviciene.

The couple, both with a background in geography – they met in university studying the subject – have specific goals for their next few years in Korea representing their homeland.

“Putting Lithuania on the map for local businesspeople, letting them know what kinds of complementary products or technology they can find in Lithuania and what regional markets they would gain access to by trading with Lithuania, that’s what we’re hoping to do in our time here,” said Slepavicius.

There may also be some misconceptions about his country that the envoy needs to clear up.

The media portrayal of Lithuania as a country not afraid to pick fights with China or Russia is not entirely correct, according to Slepavicius.

To hear more about Lithuania’s foreign policy priorities in regards to Korea and greater Asia, as well as the country’s regional security concerns as the host country of a NATO summit next July, the Korea JoongAng Daily sat down recently with the couple at their residence in Seoul.

The following are edited excerpts of the interview.

Q. Lithuania and Korea established relations in 1991 but it maintained its diplomatic mission to Korea in Beijing through dual accreditation until last year when Lithuania opened a separate embassy in Seoul. Can you tell us what changed in the Lithuanian foreign policy on Korea to give way to this decision?
A. Actually, Korea has been on the list [among countries for Lithuania] to open embassies for quite a long time. It has been the objective of the current administration in Lithuania to expand relations with the Indo-Pacific region, and so we have opened embassies in Canberra, Seoul and Singapore in the past two years, and just two months ago we opened our trade office in Taipei. These are like-minded partners with common values on democracy, with free market principle where businesses aren’t dependent on political circumstances.

The Taiwanese trade office that opened in Lithuania last year came under heavy criticism from Beijing for naming itself the Taiwanese Representative Office, instead of Taipei. In protest, China even imposed a customs block on Lithuanian exports. What’s the latest?
It is a typical office that Taiwan has throughout the world including in Seoul. [The controversy] was regarding the name of the office, which was decided by Taiwan. For Lithuania, the word Taiwanese simply means “of the people” of Taiwan. But the Chinese government’s reaction was what it was. So we tried to find new markets in the Indo-Pacific region and our exports to the region grew by 60 percent this year compared to last year. We’re not violating the one-China policy. We respect that, but we also respect the democratic government of Taiwan and our businesses have a lot of interest in each other.

Vilnius is hosting the NATO summit in July. Will Ukrainian membership of NATO be discussed?
Ukraine’s NATO membership is for the people of Ukraine to decide. NATO’s policy is to be open to any who wants to join. It is my hope, and I am sure of many others, that by the time of the summit, the war in Ukraine would be over. For that, we will need peace on terms that are acceptable to the people of Ukraine and peace that is recognized by the international community.

Given Lithuania’s past occupations by Soviet Union, Lithuanian leaders from as early as the 1990s have warned about Europe’s dependence on Russia. Prime Minister Ingrida Simonyte has been quoted more than once as saying the world had several wake-up calls about Russia’s intentions years back.
Some European politicians now say it would have been better if we had listened to Lithuania. We were warning our partners that we are dealing with an imperialistic and revisionist regime [in Russa], that we must be cautious. Where the West might see economic interdependence, totalitarian regimes will see it as the West’s dependence on them – they do not count lives, or costs or losses, but only their political agenda. We never believed that the Kremlin would accept the status quo. Their goal is to redraw the borders in Europe, and maybe even beyond.

This year, Lithuania became one of the first European countries to cut energy reliance on Russia. How was this possible?
In spring, Lithuania became the first European country to buy zero energy resources from Russia. It’s because we learned earlier on from Russia’s numerous economic blockades that depending on a non-democratic country economically can make us vulnerable. There is no doubt what a huge market Russia is. But we also experienced that the less we are dependent on Russia, the more powerful and stronger we became as a nation.
That’s why we built our oil terminal from the very beginning of our independence. We built a liquid natural gas terminal with Hyundai Heavy Industries, we built gas pipelines to Poland, then to Estonia and Finland, and we have electricity connections with Sweden, across the Baltic Sea, and with Poland.

Lithuania restricted Russian transport of goods to Kaliningrad via Lithuanian rails earlier this year. Has this issue been resolved?

There has been a misinterpretation of the event. It was not a transport blockade that Lithuania imposed. It was about meeting the EU competence, because when the EU imposed sanctions on [certain Russian] goods imported to the EU or transported via the EU, it included the transit to Kaliningrad. So we followed the EU decision, until Brussels [EU headquarters] told us that the transit to Kaliningrad is an exception. Transit of these specific Russian products – like coal and steel – have been normalized since.

You were previously posted to Kaliningrad, in the years before Vladimir Putin resumed the presidency of Russia in 2012. What were Lithuania’s relations with Russia like during those years?
There were years before the Second World War when Kaliningrad was part of Germany. During this time, the area was quite populated by Lithuanians. It was also there that the first book ever printed in Lithuanian, the Catechism, was printed in the 16th century. Many of these Lithuanians were allocated to Germany or were killed [during wars]. During our posting to Kaliningrad, the Lithuanians who used to call this area their home, or their descendants, would come visit Kaliningrad on tours. We call this a rosy period, because back then we invested a lot to help Kaliningrad become an area of cooperation between Russia and the EU.

If you can imagine the perfect outcome by the end of your tenure in Seoul, what might it be?
I would be able to call my mission successful if by the end of my tenure in Korea, Lithuania would welcome up to 50,000 tourists from Korea annually; have Korean SMEs start trading in the country and one or two big Korean brands, like Samsung, SK, or LG invest in Lithuania; and have two to three times higher trade volume between us. Our histories have rarely crossed each other, yet we have lived through very similar experiences. We have had difficult neighbors in our regions who occupied us, we had to fight for our independence, and we opened up to the world market around the same time, even joining the UN just a year apart. Our economies are not competing, they are fully complementary and there are many opportunities to make the best of our worlds.