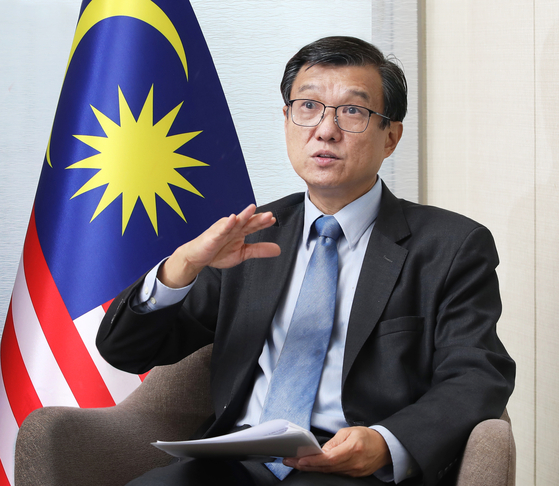 Malaysian Ambassador to Korea Lim Juay Jin speaks with the Korea JoongAng Daily at the embassy in Seoul on Tuesday. [PARK SANG-MOON]


There is no single way to explain the global popularity of Korean dramas, music and films, but one country in Southeast Asia was an early adopter.

“BTS has been a worldwide phenomenon, no doubt about that, but even a relatively middle aged man like me, I know SS501, T-ara and Sistar, IVE, NewJeans, you name it,” said Lim Juay Jin, the newly arrived Malaysian ambassador to Korea.

“So you can rest assured that that is the beauty of Korean culture: it captures the heart and soul of any person.”

Just two and a half weeks into his tenure in Seoul, Lim says he is eager to pick up the language so that next time he does an interview with the Korea JoongAng Daily, he can do it in Korean.

“There is a saying in Malaysia, that says if you don’t know or understand something, you will not love it,” he said, speaking in his office in Seoul. “I am the 17th Malaysian ambassador to call Korea my second home, and I look forward to continuing the good work of my predecessors to strengthen Malaysia-Korea relations.”

To discuss what may be next on the horizon for Malaysia and Korea, the Korea JoongAng Daily sat down with Lim at the Malaysian Embassy in Seoul on Tuesday. The following are edited excerpts of the interview.

Starting this year, Malaysia and Korea became parties to two regional trade blocs, the Regional Comprehensive Economic Partnership and the Indo-Pacific Economic Framework. Some opinion pieces have characterized the former as Beijing-driven and the latter as Washington-driven. What is the Malaysian perspective?

The sheer fact that both countries are in both groups speaks for itself – that Malaysia and Korea are very much aware of the benefits accrued to these two. I don’t agree with the characterization of the Regional Comprehensive Economic Partnership, because it is actually mainly Asean-driven with Asean centrality. The partnership cannot be driven by one nation, because it’s not an exclusive partnership. When it comes to the Indo-Pacific Economic Framework, one can consider it more like an institution for economic diplomacy. To those people who apply the lens of U.S.-China rivalry to these economic associations, I’d like to propose another idea. Why not look at it from the point of view of inclusivity?
Where does the Malaysian policy of promoting neutrality in its diplomatic overtures stand with heightened tensions from U.S.-China rivalry in the region including in the South China Sea?
From the way we see it in Malaysia, both the United States and China are very important partners and we want to maintain very good relations with both countries, which we have all these years. We enjoy strong trading relations with China, which stretch back hundreds of years to the Malacca Sultanate in the 14th century. We also want to be working hard to enjoy the benefits of having the United States as our important and solid trade partner.

It’s been five years since the assassination of Kim Jong-nam, the North Korean leader’s half-brother, at the Kuala Lumpur airport shocked the world. Where does the Malaysian policy on North Korea stand today?
When we established relations with the DPRK [Democratic People’s Republic of Korea] in 1973, we did so despite the negative international outlook on it at the time, and we continued to maintain ties with the country because we strongly believe that no country should be isolated regardless of their ideology or beliefs. Good relations have been significantly strained following unfortunate incidents, including the DPRK’s decision to sever its diplomatic relations with Malaysia following the extradition of a DPRK citizen to the United States. Today, we still think that no country should be isolated, regardless of its ideology. And we certainly believe that dialogue and consultation are the best recourses to promote long lasting peace and stability on the Korean Peninsula.
Korean music and films have been in the global spotlight in recent years, but the fan base in Malaysia seems to date back a few decades. What’s been your experiences of so-called K-culture?
K-pop has always been one of the pillars of relations between Malaysia and Korea. As you said, the history of K-pop in my country dates to the 2000s, when we watched “Winter Sonata” (2002) and “Autumn in My Heart” (2000). The latter was such a hit in Malaysia, one could call it “Korea in My Heart.” We were mesmerized by K-culture, and so many Malaysians started to learn the Korean language at the time, including my sister, who took a class in her university.

BTS has been a worldwide phenomenon, no doubt about that, but even a relatively middle aged man like me, I know SS501, T-ara and Sistar, IVE, NewJeans, you name it. So you can rest assured that that is the beauty of Korean culture: it captures the heart and soul of any person.

As an ambassador, where and how are you looking to make connections between the two nations’ soft power?
It’s our hope that we can emulate what Korea did to project its soft power globally, which I believe Korea was able to do in combination with its hard power. Korea is one of the epicenters of technological advancement and scientific research in the world. It is way ahead in electric appliances, in modern communication technology, in semiconductors, the automobile industry. Hyundai is a brand that Malaysia is very comfortable and familiar with.

One of our foreign policy priorities today is cultural diplomacy, which aims to enhance Malaysia’s unique national identity on the global stage, while simultaneously promoting greater market access to Malaysia cultural products – something that Korea has done so well. We want to project Malaysia so that people will start to appreciate Malaysia for what it really is. 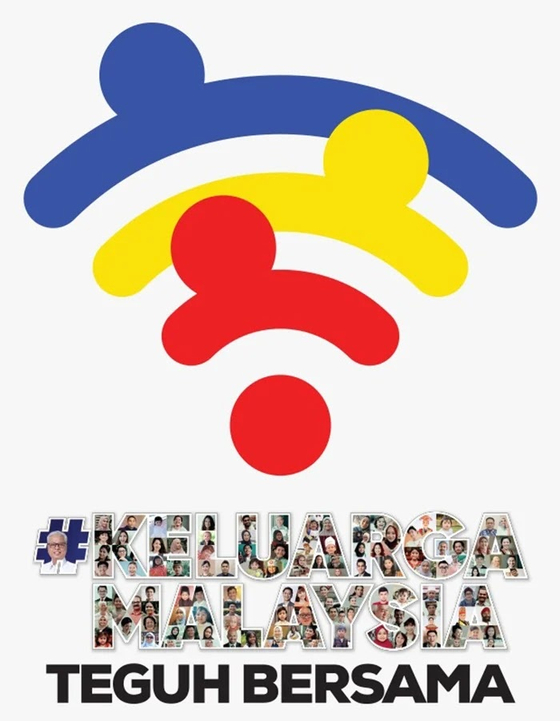 Logo for the Malaysian National Day celebration for 2022. [EMBASSY OF MALAYSIA IN KOREA]

There is something common in our approach here, between Korea and Malaysia. Korea’s President Yoon Suk-yeol put forward national unity as an objective after he was elected, calling for national cohesiveness and collective strength. That is also what we want to do in Malaysia, to promote Malaysia to a further height by drawing its strength from a sense of belonging together. The logo for our national day this year represents this well, for the different colors used in the Wi-Fi connection design represent the diversity of our people and nation, who in harmony will push the country through further development of communication infrastructure and digitalization.

With Covid-19 restrictions being lifted around the world to encourage more travel, where do you recommend people visit in your country to experience “Malaysia, truly Asia”?
Kuala Lumpur certainly is a vibrant city that you have to visit because it is rapidly developing and growing. One of the Twin Towers in the city is well known to many Korean visitors as it was built by Samsung C&T.

But the capital city alone cannot represent all of Malaysia. A glimpse of our traditional way of life might be caught in Kota Kinabalu in the east and Langkawi in the northwest and Pangkor Island on the west. Our beaches enjoy nice weather all year around, with 3,000 species of fish and hundreds of coral species. I come from the state of Malacca, well known for its Unesco World Heritage sites. When you come to Malaysia, and understand Malaysia, you will fall in love with the country.