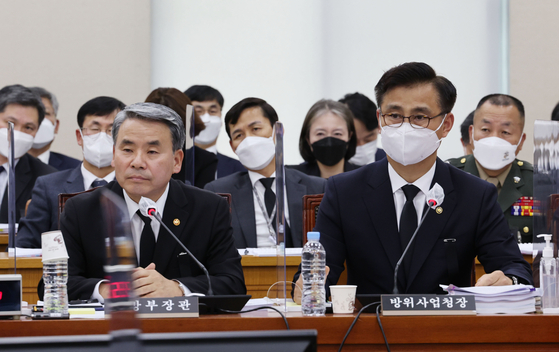 
South Korea’s foreign and defense ministers on Monday defended the country’s decision to send a navy ship to participate in Japan’s international fleet review next month, saying Korea need to cooperate with neighbors to bolster its security.

It will be its first participation in the event in seven years.

The South Korean Navy plans to send the 10,000-ton logistics support ship ROKS Soyang to the fleet review, which is due to be held in Sagami Bay near Tokyo on Nov. 6.

Fleet reviews, where ships from a particular navy or different naval forces are paraded and reviewed by an incumbent head of state and other official civilian and military dignitaries, are a longstanding type of defense exchange.

Korea’s decision to participate in the fleet review by the Japan Maritime Self-Defense Force has ignited a domestic controversy, especially since crewmembers of a Korean navy ship are expected to salute the host country’s naval ensign.

That flag is a modified version of the Rising Sun flag, which served as the flag of the military of the Empire of Japan and is widely viewed in Korea as a painful symbol of Japanese colonial rule.

South Korea has not participated in Japanese fleet reviews in recent years amid a downturn in relations over other disputes tied to Japanese colonialism, including lawsuits by Koreans forced to work for Japanese companies, as well as wider Korean antagonism to the flag.

“The decision was made after a comprehensive review of past cases and customary international practices,” Foreign Minister Park Jin told lawmakers during a session of the National Assembly’s foreign affairs committee.

Park emphasized that Korea has participated in past Japanese fleet reviews, including one held during the previous liberal administration of President Kim Dae-jung, in an effort to head off criticism from the liberal Democratic Party.

He also said that the growing military threat from North Korea had played a role.

“It is my understanding that such a decision was made in consideration of North Korea’s back-to-back provocations and the grave security situation around the Korean Peninsula,” he added.

During a session of the National Assembly’s defense committee, Defense Minister Lee Jong-sup said the Korean government made the decision to participate in the fleet review because of the need for international cooperation on national security.

“Security was the most important priority [in making the decision], as was the pursuit of realizing values held in common with the international community,” he told lawmakers, in apparent reference to efforts by Seoul, Washington and Tokyo to boost their trilateral security cooperation to counter the North’s nuclear and missile threats.

In early October, the three countries’ militaries held a ballistic missile defense exercise in waters between South Korea and Japan, a few weeks after they conducted their first trilateral anti-submarine drills in five years.