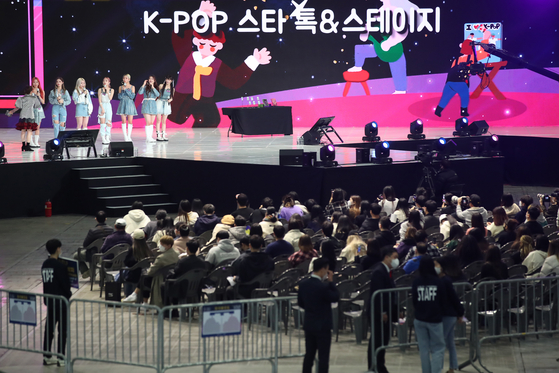 
The annual K-Culture Festival will kick off on Sept. 30 at the newly furbished Gwanghwamun Square in central Seoul and the Jamsil Sports Complex in southern Seoul.

The festival has been co-organized by the Ministry of Culture, Sports and Tourism and the Korean Foundation for International Cultural Exchange in an attempt to “show the world different charms of Korean culture.”

There will be both offline and online programs so that “anyone who loves Korean culture can join in the festival.”

The K-Culture Festival Concert will signal the start of this year’s festival. The concert starts at 7 p.m. at a stage set up in front of Heungnyemun Gate in Gyeongbok Palace. Artists like Lee Ju HaNg, a daegeum (a larger traditional bamboo flute) player, Haeum, a trio of traditional Korean musicians, cellist Han Jae-min and pianist Park Young-sung will perform during the concert. 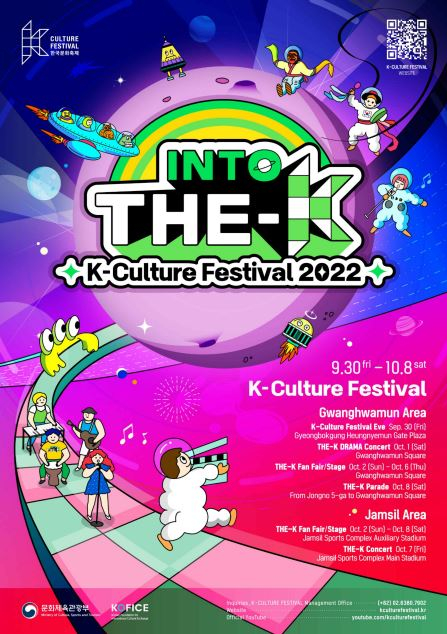 The poster of this year’s K-Culture Festival [MINISTRY OF CULTURE, SPORTS AND TOURISM]

Korean drama fans will enjoy the K-drama Concert that will be organized in front of Gwanghwamun Square on Oct. 1 at 7 p.m. K-pop singers behind a number of hit drama series’ soundtracks like Paul Kim, Kim Na-young and Kyuhyun are included in the lineup.

K-pop fans will have to head over to southern Seoul for The-K Concert on Oct. 7. Acts like NCT Dream, STAYC and BLANK2Y are gearing up to perform at Olympic Stadium inside Jamsil Sports Complex.

The-K Billboard Awards will also be jointly organized with the American music and entertainment magazine Billboard, highlighting the achievements of K-pop singers who landed on Billboard charts.

During the festival, which runs until Oct. 8, there will also be a booth setup at Jamsil Sports Complex for K-Culture fans to communicate and exchange cultural experiences.

From Oct. 2 to 8, The-K Fan Fair will be held both at the Gwanghwamun Square and Jamsil Sports Complex’s Auxiliary Stadium for fans to experience Korean food, fashion, and characters. Popular K-pop singers like The Boyz will be holding panels to engage in various programs with K-pop fans.

The-K Stage will be presented from Oct. 1 to 7 to introduce hip-hop and jazz artists as well as DJs in Korea. Stages will be set up both at Gwanghwamun and Jamsil and artists like Pentagon, Brave Girls, VIVIZ, CIX, JK Kim Dong-wook, Jungin, Sunwoojunga, 10cm, Cheese, Stella Jang, Louis, U Sung-eun, The Quiett, Raiden, and Ginjo are included in the lineup.

To wrap up the festival, The-K Parade will be held inviting people to parade from Jongno 5-ga to Gwanghwamun Square while listening to hit K-pop songs.

“The Ministry of Culture, Sports and Tourism will continue to hold global Hallyu [Korean wave] festivals where visitors can experience the essence of popular and traditional Korean culture and related industries to strengthen the spread of Hallyu,” the ministry said in a statement.

All experiences and concerts are free of charge. For more information, visit kculturefestival.kr.