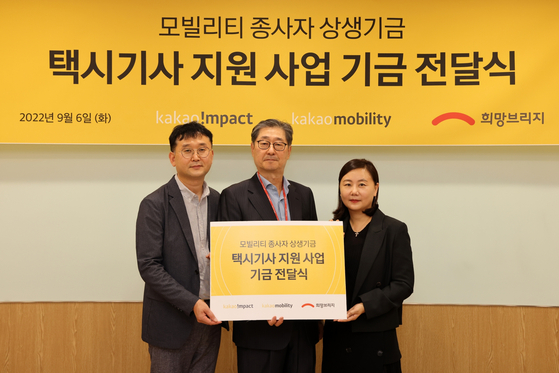 
Kakao said on Wednesday that it will raise 10 billion won ($7.2 million) over the next five years to support taxi drivers and chauffeurs.

Kakao Impact Foundation of Kakao and Kakao Mobility set up a fund with the goal of supporting mobility service workers who are suffering from disease or accidents and donated 2.2 billion won to Hope Bridge Korea Disaster Relief Association, according to the companies. The donation ceremony was held on Tuesday at Hope Bridge’s office in Mapo District, western Seoul.

The donated money will be used to help taxi drivers suffering from diseases that are not covered by insurance, said Kakao.

The announcement came about two weeks after the tech company scrapped its plan to sell a stake in Kakao Mobility, a transportation service company, on Aug. 18.

Kakao had been toying with the idea of selling part of its stake in Kakao Mobility as the tech company has been facing criticism for leveraging market dominance, but decided against it due to the internal opposition from Kakao Mobility employees.

As the sell-off plan has been scrapped, Kakao said in a release that Kakao Mobility will “practice corporate social responsibility” and “grow together with mobility partners and vulnerable groups for continuous innovation.”

In April, Kakao pledged to create a 300-billion-won fund to support creators and small, independent merchants. The latest announcement to allocate 10 billion won to support mobility service workers is part of the project, said Kakao.