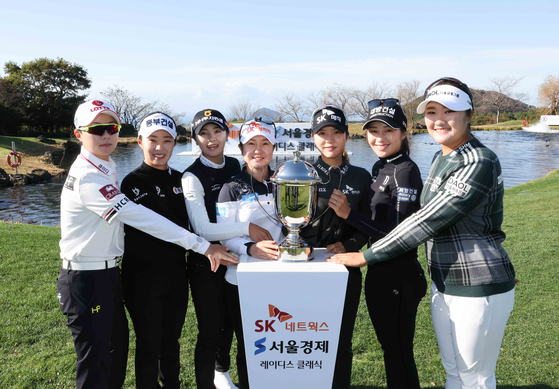 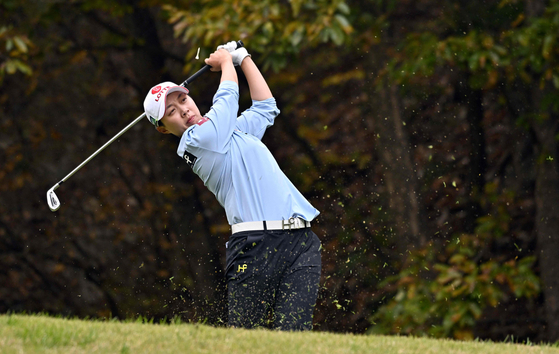 Kim Hyo-joo tees off on the seventh hole during the final round of the BMW Ladies Championship golf tournament at Oak Valley Country Club in Wonju on Sunday. [YONHAP]


LPGA golfer Kim Hyo-joo makes another brief sojourn back to the KLPGA Tour this week as she looks to defend her title at the SK Networks Seoul Economics Ladies Classic, teeing off Thursday at Pinx Golf Club in Seogwipo, Jeju.

After jetting into Korea last week to play the LPGA Tour’s BMW Ladies Championship, where she tied for third, five strokes behind champion Lydia Ko, Kim is looking to carry that form into this week’s KLPGA event and defend her title.

Last year, Kim competed as an invited player at the SK Networks Seoul Economics Ladies Classic. Despite having a slow start in the first round, she found her form in the third round shooting four birdies and no bogies to join four other golfers on the top of the leaderboard by the penultimate hole. Then, on the very last hole, Kim pulled out of a five-woman tie with a birdie to take a solo lead.

Carrying that form into the final round, Kim was able to outplay by one stroke runner-up Lee So-young, who had played to an eight-under-par on the last day.

This is Kim’s fourth KLPGA tournament this year. She finished fourth at the 44th KLPGA Championship in April, then failed to defend her OK Financial Group Se Ri Pak Invitational title in September, finishing 11th. Most recently, she failed to make the cut at the Hana Financial Group Championship.

“I know defending my title won’t be easy,” said Kim at a pre-tournament press conference on Tuesday. “Although I think it is still possible if I do my best and try to play my best and play to a good score.”

Spending most of her time on the LPGA Tour, Kim is one of four Koreans to have won an LPGA title this season. Ko Jin-young won the HSBC Women’s World Championship in March 6, Kim won the Lotte Championship on April 16, Ji Eun-hee won the Bank of Hope LPGA Match-Play on March 29 and Chun In-gee won the KPMG Women’s PGA Championship on June 26.

Kim has five LPGA titles under her belt and is currently the third-highest ranked Korean at world No. 9, following No. 1 Ko and No. 8 Chun.

Kim will be teeing off alongside last week’s champion You Hyo-ju and KLPGA favorite Park Min-ji.

You will be looking to repeat her success last week when she won the Wemix Championship, marking her first-ever win, while Park, who currently tops the KLPGA money list, will be looking for her sixth title of the season. Park will be teeing off for the first time in three weeks after winning her latest tournament, the Hite Jinro Championship, on Oct. 9.

Alongside Kim, LPGA golfer Lee Jeong-eun throws her hat into the KLPGA ring this week as an invited player.

“To tell the truth, I am going through a rough patch,” Lee said on Tuesday. “I am not confident at the moment with my shots and putts. But I have many good memories in Jeju and I want to find my form there.”

In 2017, Lee played to a course record score of nine-under-par, 63, during the second round of the SK Networks Seoul Economics Ladies Classic. That record still stands today.

A total of 102 golfers will tee off at Pinx Golf Club on Thursday.