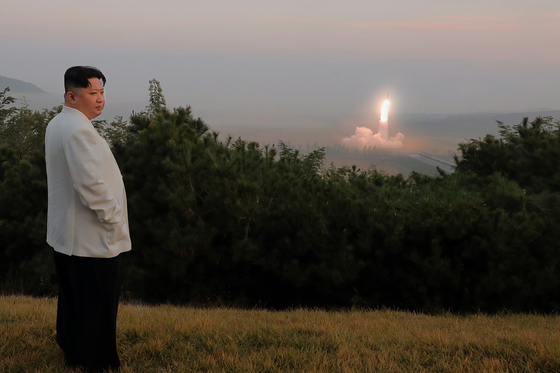 
North Korean leader Kim Jong-un said his regime’s recent spate of missile tests confirmed its ability to carry out tactical nuclear strikes and dismissed the necessity of dialogue with Seoul or Washington, according to Pyongyang’s state media on Monday.

The report, issued by the state-run Korean Central News Agency (KCNA) on the anniversary of the founding of the ruling Workers’ Party, quoted Kim as saying, “There is no need to engage in talks with our enemies, nor is there anything to discuss,” while vowing to strengthen his regime’s nuclear capabilities “by all means necessary.”

According to the KCNA, Kim Jong-un watched exercises by “tactical nuclear operation units” to assess what he described as the regime’s “war deterrent and nuclear counterattack capabilities,” as well as to “send a serious warning to the enemy.”

The North Korean military practiced “loading tactical nuclear warheads” during the ballistic missile launches in addition to conducting “a super-large multiple rocket launching drill simulating an attack on major ports of the enemy,” according to the KCNA.

The North Korean air force exercise was confirmed by the KCNA, which said the regime conducted the missile launches and the “unprecedented” air force drill in response to the presence of the aircraft carrier USS Ronald Reagan in the East Sea.

The USS Ronald Reagan returned to the East Sea to respond to North Korea’s launch of an intermediate range ballistic missile (IRBM) over Japan on Oct. 4, soon after it finished four-day joint naval exercises with the South Korean Navy in the East Sea on Sept. 29.

The KCNA also released photos from the regime’s seven missile tests from Sept. 25 to Oct. 9 with Kim apparently in attendance at several.

The photos released by the KCNA depicted what experts have tentatively identified as a KN-25 tactical ballistic missile, a KN-23 short-range ballistic missile (SRBM), an underwater launch version of the KN-23, an unnamed heavy-payload SRBM of the kind last seen in March 2021, and a KN-09 multiple-launch rocket system.

Writing on Twitter, nuclear policy and missile expert Ankit Panda noted that the North described all seven of its recent missile launch events as being tied to “tactical nuclear operation units,” implying that the North is aiming to mount its nuclear weapons on a wide range of missiles for “first-use-in-theater” in the event of armed hostilities on the Korean Peninsula.

Panda observed from the KCNA photos that the IRBM launched on Oct. 4 is a single-stage, liquid-fueled missile “consistent with the Hwasong-12,” but with several discernible differences, such as a new first-stage engine lacking smaller thrusters, as well as a greater range of approximately 4,500 kilometers (2,796 miles) compared to the 3,700 kilometers traveled by the Hwasong-12 in 2017.

If it was indeed a new IRBM that the North fired over Japan, it would suggest a great degree of confidence in the missile’s engine, Panda wrote in another post on Twitter.

“It’s unprecedented for North Korea to introduce and test a new long-range missile type on a ‘normal’ trajectory; usually, they ‘loft’ their large new missiles,” Panda wrote, referring to the North’s usual practice of firing such missiles at a sharp angle to reduce demonstrated range.

“That they’d buck this trend and also overfly Japan suggests either a tremendous amount of confidence in this new engine, or a greater acceptance of risk.” 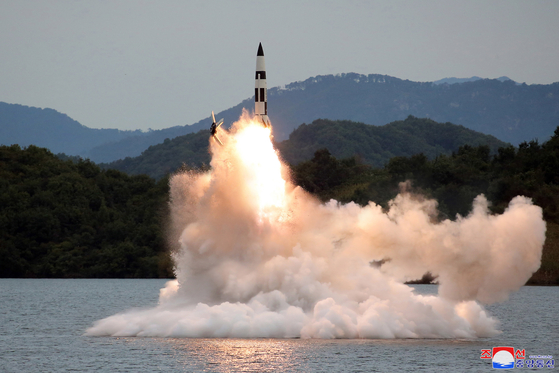 A photograph released by the KCNA shows the launch of a KN-23 short-range ballistic missile (SRBM) from an underwater platform in a reservoir during a recent test. [YONHAP]

The photos released by KCNA also provided visual confirmation that the regime launched a ballistic missile, likely a modified version of the KN-23, from an underwater platform in a reservoir, which was mentioned in agency’s Monday report.

That launch suggests the North remains intent on developing submarine-launched ballistic missile (SLBM) technology that would make its missiles more difficult to detect and intercept.

SLBMs are strategic weapons essential to maintaining retaliatory or second strike capability in the event of a nuclear attack. They are more difficult to detect than ground-based ballistic missiles, which require launching facilities that can be more easily detected through satellite and air reconnaissance.

In response to Kim’s remarks, an official from the South Korean presidential office said Monday, “It is important to accurately recognize the severity of security issues in the Korean Peninsula and Northeast Asia to prepare properly.”

“This series of ballistic missile (launches) and these various provocative acts are in clear violation of the United Nations Security Council resolutions and are absolutely unacceptable,” Kishida told reporters when asked to comment on Kim’s remarks.

But Kim’s message to Seoul and Washington via state media suggests his regime will continue to carry out military actions that could worsen tensions on the peninsula and in the region.

“We must, first of all, send more definite signals with more powerful and resolute determination and actions to the enemy, who is aggravating tensions in the region by frequently deploying vast armed forces,” Kim was quoted as saying by the KCNA.