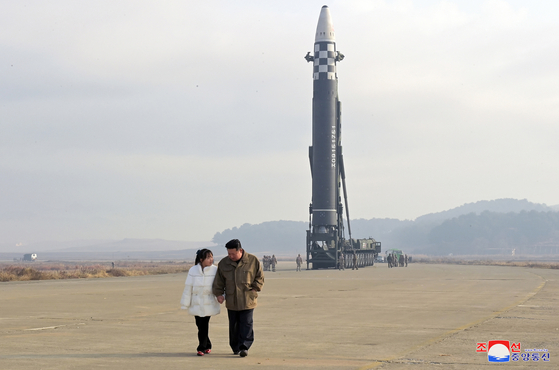 North Korean leader Kim Jong-un, right, holds hands with his daughter as they prepare to watch the launch of a new Hwasong-17 intercontinental ballistic missile (ICBM) at Pyongyang International Airport Friday in a photo released by the North’s official Korean Central News Agency (KCNA) Saturday. It is the first time one of Kim’s children has been revealed to the public. [KCNA]

North Korean leader Kim Jong-un attended the test fire of the missile in person, according to the North’s official Korean Central News Agency (KCNA) Saturday, and was accompanied by his daughter in her first public appearance covered by state media.

The KCNA reported that a “new-type” Hwasong-17 was launched Friday from the Pyongyang International Airport and flew 999.2 kilometers (621 miles) at an apogee of 6,040.9 kilometers for 4,135 seconds, or around 69 minutes, landing in international waters in the East Sea.

The Hwasong-17, dubbed the “monster” missile, is known as the North’s newest and largest ICBM and is believed to be capable of carrying multiple warheads with a range of around 15,000 kilometers, which would puts the United States mainland within its range. The distance from Pyongyang to Washington is about 11,000 kilometers.

On Friday, South Korean military authorities confirmed that North Korea fired an ICBM at 10:15 a.m. from the Sunan area in Pyongyang toward the East Sea.

The missile was launched at a lofted angle and flew around 1,000 kilometers at an apogee of 6,100 kilometers and a top speed of Mach 22, said the Joint Chiefs of Staff (JCS). It landed around 200 kilometers west of Japan’s Oshima Island, off the coast of Hokkaido, at around 11:23 a.m.

A lofted trajectory means the missile is fired at a much higher angle into space, resulting in a shorter distance traveled than if it was fired at a lower angle. Analysts said the latest ICBM launch was one of the North’s most powerful yet.

According to the KCNA in an English-language report Saturday, Kim declared after the launch on Friday that if “enemies continue to pose threats,” Pyongyang “will resolutely react to nukes with nuclear weapons and to total confrontation with all-out confrontation.”

The KCNA reported that Kim was “together with his beloved daughter and wife” to take part in “a crucial milestone in bolstering up the nuclear forces of the DPRK.”

The DPRK is the acronym for the North’s official name, the Democratic People’s Republic of Korea.

State media, including the Rodong Sinmun, revealed a series of photographs over Saturday and Sunday of the leader and his daughter holding hands and walking around together on the launch site and watching the missile take flight.

Kim’s daughter, in a white winter coat and black pants, is also photographed watching her father speak to military officials on the ICBM missile launch alongside her mother Ri Sol-ju. Her name, age and other details were not revealed. More images of Kim, Ri and their daughter celebrating the launch and one with Kim hugging his daughter from behind while watching a monitor, were released Sunday.

Analysts pointed out that revealing Kim’s daughter to the public appears to be a move showing North Korea’s confidence in the Hwasong-17 launch and its nuclear weapons program. It also appears to show regime security and the stability of the so-called Mount Paektu bloodline, referring to the North Korean ruling family.

In September 2013, retired NBA star Dennis Rodman, who visited Pyongyang on the invitation of the North Korean leader, revealed to media he had held Kim’s baby girl “Ju-ae” in his arms, possibly revealing her name for the first time.

The daughter in the photographs, based on her presumed age, is thought to be that second daughter, Ju-ae.

The decision to reveal the daughter is a move away from Kim Jong-un’s grandfather Kim Il Sung and his father Kim Jong-il’s efforts to keep their offspring hidden until they were ready to take power.

Kim Jong-un’s younger sister Kim Yo-jong, considered his closest aide, was also spotted in some of the photographs of the event. 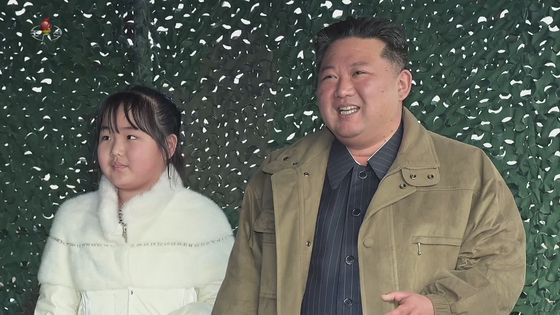 
The latest test-fire, the KCNA reported, was “aimed at checking the reliability of the weapon system and its operation.”

It added the “successful” launch “proved the reliability of the new major strategic weapon system to be representative of the DPRK’s strategic forces and its powerful combat performance as the strongest strategic weapon in the world.

Kim said that North Korea’s nuclear forces secured another “reliable” capability “to contain any nuclear threat.” He stressed the “need to show more clear action under the present situation” to make the U.S., South Korea and their allies “aware that the military counteractions against the DPRK lead to their self-destruction.”

He warned that the more the United States pushes to strengthen its “offer of extended deterrence” to its allies and conducts “war exercises,” in reference to Seoul-Washington joint military exercises, “the more offensive the DPRK’s military counteraction will be.”

Kim urged North Korea’s defense sector to develop “Korean-style” strategic weapons and “the ICBM units and all the units for the operation of tactical nukes to intensify their training with high vigilance” to conduct their “strategic duty in any situation and at any moment.”

The mention of “ICBM units” appears to refer to steps to actual deployment.

Seoul’s military authorities also said Friday that the North’s latest ICBM launch was believed to be its powerful Hwasong-17. Pyongyang first unveiled the Hwasong-17 in October 2020.

Some experts speculate that there is a possibility that North Korea has succeeded in developing technology for the ICBM to reenter the Earth’s atmosphere, which Pyongyang has previously struggled with, through its latest launch.

On Nov. 3, the North test-fired the same ICBM, but the launch apparently ended in failure, according to the South’s military. The missile was launched from Sunan in Pyongyang and flew about 760 kilometers at an apogee of around 1,920 kilometers at a top speed of Mach 15. However, following the second stage separation, military officials said the Hwasong-17 seemed to have failed in normal flight.

Friday’s launch was similar to the trajectory of the launch of a Hwasong-17 on March 24, also launched from Pyongyang International Airport, which flew 1,080 kilometers at an apogee of 6,200 kilometers. Observers pointed out that meaningful progress seems to have been made in the development of the missile. The speed on Friday’s launch exceeded Mach 20, which is the speed at which ICBMs usually reenter the atmosphere.

“This exercise once again demonstrated the South Korea-U.S. alliance’s combined defense capabilities with overwhelming force and the United States’ ironclad commitment to protecting the Korean Peninsula and providing extended deterrence,” the JCS said in a statement Saturday.

The redeployment of the B-1Bs on the Korean Peninsula just 14 days after the last air drill and one day after North Korea’s ICBM launch appears to reflect Seoul and Washington’s agreement to a “timely and coordinated” deployment of strategic assets in a bilateral summit in May as part of efforts to strengthen U.S. extended deterrence.

She referred to a trilateral summit between South Korean President Yoon Suk-yeol, U.S. President Joe Biden and Japanese Prime Minister Fumio Kishida on the sidelines of Asean meetings in Phnom Penh, Cambodia on Nov. 13. In a joint statement after the summit, Biden assured of U.S. commitment to “reinforce extended deterrence,” backed by the “full range of capabilities, including nuclear.”

U.S. Vice President Kamala Harris convened a meeting with allies on the sidelines of the APEC gathering in Bangkok to discuss the North’s ICBM launch Friday.

“We strongly condemn these actions, and we again call for North Korea to stop further unlawful, destabilizing acts,” said Harris.

“This conduct by North Korea most recently is a brazen violation of multiple” UN Security Council resolutions and “destabilizes security in the region and unnecessarily raises tensions,” she added.

“On behalf of the United States, I reaffirm our ironclad commitment to our Indo-Pacific alliances,” said Harris, urging North Korea “to commit to serious and sustained diplomacy.”

On Monday, the UN Security Council plans to hold an emergency meeting to discuss the ICBM launch in New York.

South Korea was expected to take part in this meeting as a related country, according to diplomatic sources Sunday.