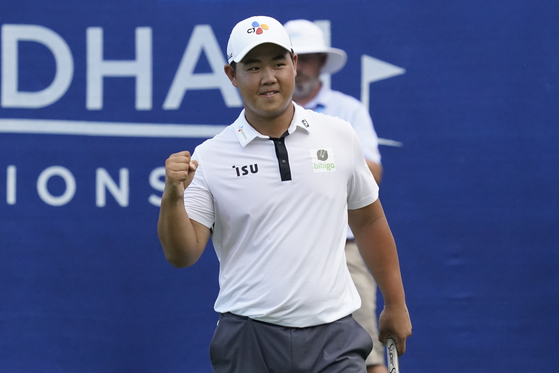 
Kim Joo-hyung was nominated on Monday for the PGA Tour Rookie of the Year award, alongside Sahith Theegala and Cameron Young of the United States.

If Kim, who competes as Tom Kim on the PGA Tour, wins, he will be only the second Korean to be named Rookie of the Year after Im Sung-jae, who in 2019 became the first-ever Asian to achieve the feat.

In the 2018-19 season, Im had seven top 10 finishes including a tied third place finish at the Arnold Palmer Invitational presented by Mastercard.

The PGA Tour first started naming the Rookie of the Year in 1990. At the end of every PGA Tour season, members of the Players Advisory Council nominate the best players for the award. PGA Tour members who have played in at least 15 official money PGA tournaments during the season can then cast their votes. The nominee with the most votes wins the annual award.

Twenty-year-old Kim has made it on to the list this season after making a rapid climb on the PGA Tour in the final few weeks of the season.

After receiving special temporary membership on the Tour in July after The Open Championship, Kim two weeks later burst onto the scene with his first-ever win at the Wyndham Championship, earning a PGA Tour card and the right to compete in the first two legs of the FedEx Cup Playoffs.

The temporary membership Kim earned in July only allowed him to compete for the remainder of the 2021-22 season with just three events — the 3M Open, Rocket Mortgage Classic and Wyndham Championship — and the FedEx Cup playoffs remaining at the time.

The Wyndham Championship was only Kim’s 15th start on the PGA Tour. He played his first PGA event on the 2019-20 Tour, when he missed the cut at the PGA Championship. In the 2020-21 season, Kim played five events, his best finish was at the Puerto Rico Open when he tied for 15th.

To secure his spot on the PGA Tour, Kim was looking to earn as many FedEx Cup points in the three events to qualify for the three playoffs.

But Kim did more than just that, after tying for 26th in the 3M Open and finishing in a solo seventh place at the Rocket Mortgage Classic, he finished his regular season with a bang, winning his first-ever PGA title at the last event, five strokes ahead of countryman Im and John Huh of the United States, who tied for second place.

Kim tied for 13th at the FedEx St. Jude Championship then finished tied 54th at the BMW Championship, failing to advance to the FedExCup playoffs. Despite missing out of the season finale, Kim has had a successful season making 10 cuts, six top 25 finishes including three top 10 finishes.

As neither American nominee has won this season, Kim is the only nominee who has a title to his name.

The voting will close on Friday at 5 p.m., with winners announced at a later date.