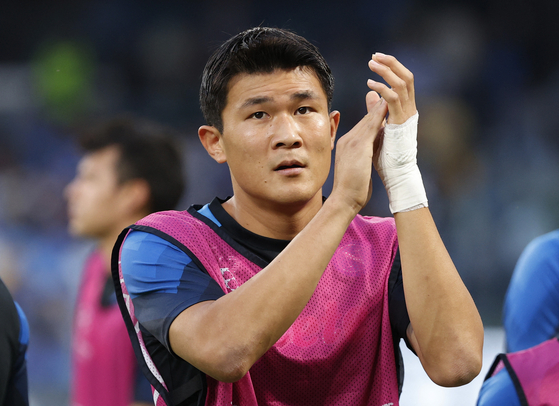 Napoli’s Kim Min-Jae reacts during the warm up before the match against Ajax at Stadio Diego Armando Maradona, Naples, Italy on Oct. 12. [REUTERS/YONHAP]


Playing in defense is rarely a glamorous role, with mistakes far more likely to make the headlines than a good day on the pitch. Napoli’s Kim Min-jae doesn’t seem to have that problem, drawing praise once again this week as he is counted among the very best center-backs in the world.

Football magazine FourFourTwo included Kim in “Ranked! The 10 best centre-banks in the world” on Monday, ranking the Korean defender at No. 10 on a roundup of the center-backs in the game.

“Signed from Fenerbahce in the summer to replace the Chelsea-bound Kalidou Koulibaly,” the article said, “Kim Min-Jae has started his Napoli career with unerring consistency as the side from Naples impress at the top of both Serie A and in the Champions League.”

Since arriving in Naples, Kim has played the full 90 minutes in 14 of Napoli’s 15 games across all competitions.

Across all those games, Kim and the Napoli defensive line have only conceded 13 goals, nine in league games and four in the Champions League. Not only has Kim pulled his weight in defense, he has also scored two Serie A goals so far this season, against Monza on Aug. 21 and Lazio on Sept. 3.

Napoli have been on incredible form, winning 11 straight games across all competitions and remaining undefeated this season. Napoli, Real Madrid and Paris St-Germain are the only unbeaten teams in Europe’s top five leagues.

The Naples club have racked up nine wins and two draws in Serie A so far, with both draws coming fairly early on — against Fiorentina on Aug. 28 and Lecce on Aug. 31. The club has also racked up a huge goal difference, scoring 26 goals in 11 games and only conceding nine for a goal difference of 17.

Kim will be back in action with Napoli on Wednesday in a Champions League clash against Rangers.

Napoli have already earned a spot in the knockout stage despite having two games still left to play, leaving them with nothing left to achieve in the group stage except prevent Liverpool — who beat Rangers 7-1 two weeks ago — from sneaking up to the top spot.