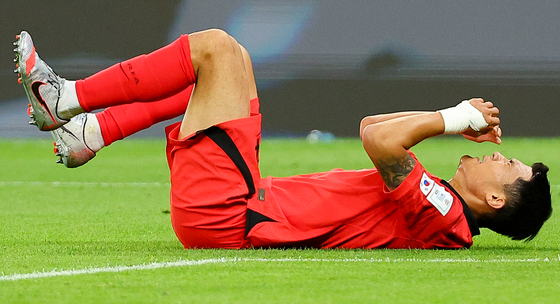 Kim Min-jae reacts after slipping while trying to chase down Darwin Nunez of Uruguay during a World Cup Group H match against Uruguay at Education City Stadium in Qatar on Thursday. [YONHAP]


The Korea Football Association (KFA) confirmed Saturday that national team defender Kim Min-jae is struggling with discomfort in his calf and skipped training on Friday and Saturday.

“Kim Min-jae has missed out on training and is resting due to pain from an injury sustained during Korea’s match against Uruguay on Thursday,” the KFA announced Saturday.

“Kim has pain in his calf. He is getting it treated while resting in his room instead of training.”

Kim sustained the injury during Korea’s first match at the 2022 Qatar World Cup against Uruguay.

In the second half, Kim slipped trying to chase down Darwin Nunez of Uruguay. After laying down on the field in pain, Kim continued to push through the full match while holding Uruguay to a 0-0 draw.

However, Kim has been unable to attend training since the match because of the lingering pain from the injury. He has now skipped two straight days of training.

Kim has for years been the center of the Korean back line, but was enjoying his biggest heyday yet, just before coming to the World Cup.

Over the past five months, Kim has been showered with accolades over his impressive performance with Napoli.

Kim got off to an impressive start with Napoli after arriving in July, playing the full 90 minutes in 14 of 15 Serie A games as The Partenopei remained undefeated in the domestic league.

He also played the full 90 minutes in every single Champions League game, where Napoli topped Group A with five wins and one loss.

Kim also scored two goals of his own early in the season, proving his strength in the air with two set piece headers, against Monza on Aug. 21 and Lazio on Sept. 3.

Since arriving in Europe with Serie A club Napoli, Kim appeared in 14 of 15 league games without losing a single one, earned Player of the Month honors twice and made it on to a number of lists of the best defenders in the world.

Kim’s role as a defender is crucial at the World Cup, especially with top forwards Son Heung-min and Hwang Hee-chan not quite in peak condition. 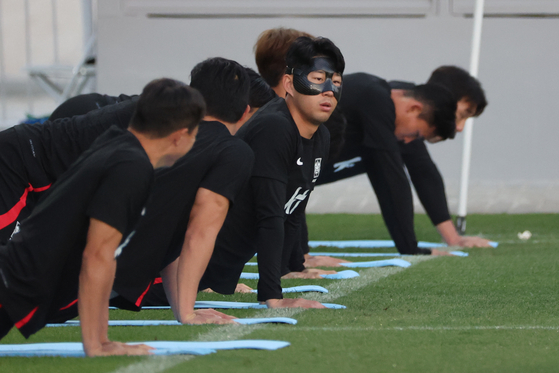 
Son underwent surgery earlier this month on one or multiple orbital fractures after his eye socket was fractured during a collision in the 29th minute of a Champions League game between Tottenham Hotspur and Marseille at Stade Velodrome in Marseille, France, on Nov. 1.

While Son did not miss out on any training sessions and also started at Thursday’s match against Uruguay playing in his distinctive Zorro mask, Son did look like he perhaps was slightly off his game, a little timid in his first touches and a little slower than he normally would be. A few solid shots on goal ended up edging slightly wide, but on the whole he wasn’t able to offer the lethal accuracy he’s best known for.

While Son seemed to be fit to play despite the substantial injury, it still remains unclear how fit he will be to play the second match when Korea take on Ghana. 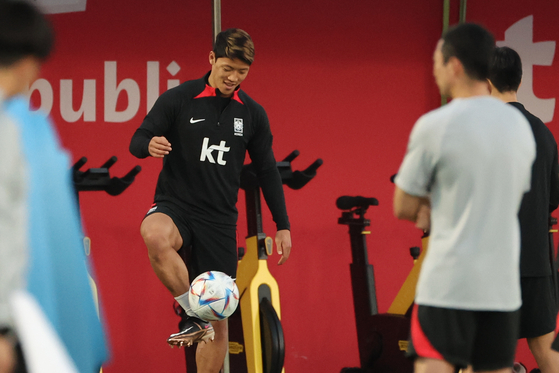 Hwang Hee-chan, left, trains on the field at Al Egla Training Site in Doha, Qatar, on Saturday. Hwang returned to the field after noticeably skipping field training before Thursday’s match against Uruguay. [YONHAP]


Hwang also has been struggling with some discomfort of his own, noticeably having skipped field training two days before the big kick off against Uruguay.

Hwang’s hamstring has been a concern since Nov. 12, when he didn’t even get a spot on the bench in Wolverhampton Wanderers 2-0 loss to Arsenal, the club’s last game before the international break.

Reports after the game suggested he was out due to hamstring discomfort, a phrase that has been repeated by the Korean camp over the last 10 days with repeated reassurances that discomfort doesn’t mean injury. However, Hwang was unable to start for Korea’s first match against Uruguay and sat on the bench during Thursday’s match.

For the upcoming match against Ghana, it seems Hwang may be able to come back on the field after KFA released photos of Hwang training back on the pitch on Saturday. One social media post about Hwang read that “the Bull is up and running,” indicating that Hwang just may be fit to start at Monday’s match against Ghana.

After the 0-0 draw against Uruguay, Korea will be looking to beat Ghana as they are the only lower-ranked country in Group H, hoping to add three points to the table.

Korea’s match against Ghana will kick off at 8 a.m. on Monday local time and will be broadcast live in Korea at 10 p.m.