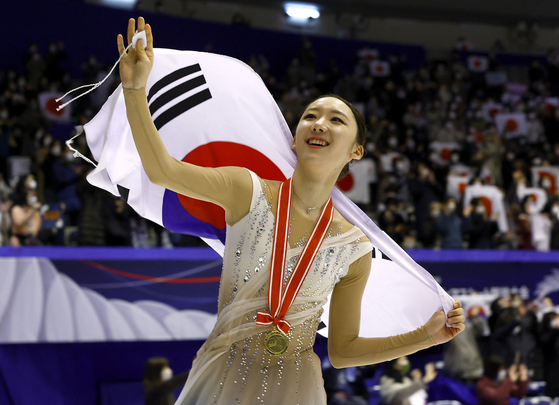 Kim Ye-lim celebrates on the podium after winning the gold medal in the women’s singles at the ISU Grand Prix of Figure Skating NHK Trophy at the Makomanai Sekisui Heim Ice Arena in Sapporo, Japan on Saturday. [REUTERS/YONHAP]

Kim Ye-lim held off reigning world champion Kaori Sakamoto of Japan by a total of 2.62 points to win the top prize. She had led Sakamoto by over four points after Friday’s short program, scoring 72.22 points, then added 132.27 points in the free skate on Saturday to win gold. Despite Sakamoto scoring higher in the free skate with 133.8 points, it wasn’t enough to overtake the leader.

That Kim was able this week to improve on her second place finish at the Grand Prix de France two weeks ago is a very positive sign.

On Nov. 5, Kim won her first-ever medal on the Grand Prix circuit in Angers, western France and said at the time that she wanted to improve on things that she felt were lacking and to compete without regrets at the ISU Grand Prix of Figure Skating NHK Trophy.

That is what she was able to do on Friday, delivering a flawless performance in her short program.

For her free skate program on Saturday, Kim slipped in her first triple flip, touching the ground with one hand to avoid a big deduction, but then tripped in her second triple flip combination and landed on the ground. However, with high component scores and an Ina Bauer towards the end of her program, Kim was able to keep her pole position and win the gold medal. 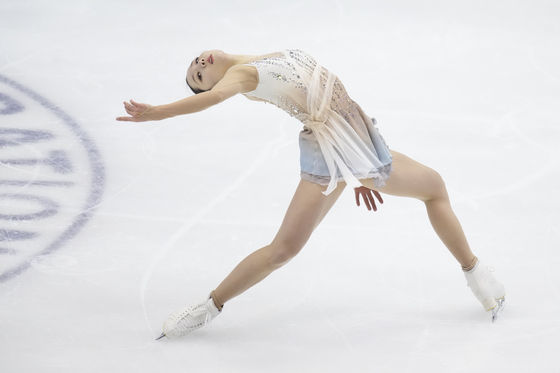 
Kim Ye-lim will advance to the finals of next month’s ISU Grand Prix of Figure Skating in Turin, becoming the first Korean female figure skater to do so since Kim Yuna.

The Grand Prix finals is the second most important competition in a season after the World Championships as it is a culmination of the Grand Prix series. Skaters earn points for their placements and only the top six from each discipline — women’s singles, men’s singles, pairs and ice dancing — qualify for the finals.

Cha Jun-hwan was the second Korean to medal in the 2018-19 season, when he won bronze following Nathan Chen of the United States and Shoma Uno of Japan. 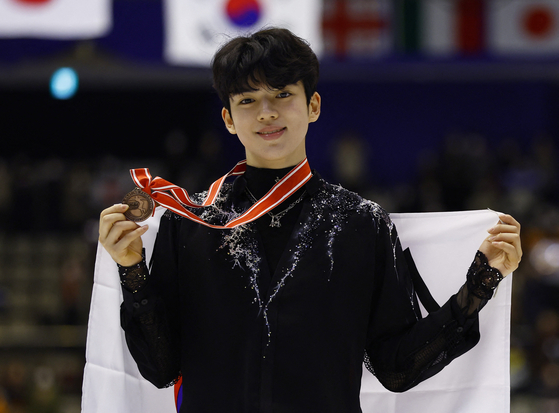 Cha Jun-hwan celebrates on the podium after winning the bronze medal in the men’s singles at the ISU Grand Prix of Figure Skating NHK Trophy at the Makomanai Sekisui Heim Ice Arena in Sapporo, Japan on Saturday. [REUTERS/YONHAP]


This year, it seems unlikely Cha will be able to repeat that feat despite finishing third at the men’s singles of the ISU Grand Prix of Figure Skating NHK Trophy on Saturday. This comes as Cha’s second bronze medal this season after the Figure Skating Grand Prix America 2022 on Oct. 22.