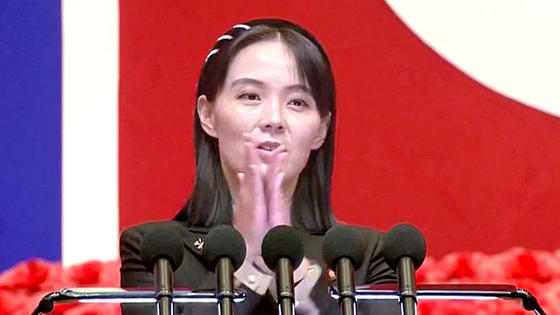 The sister of North Korean leader Kim Jong-un continued her tirade against the Yoon Suk-yeol administration on Thursday, calling it a “faithful dog” of the United States for considering sanctions on the North’s cyber activities.

“I wonder why the South Korean people still remain a passive onlooker to such acts of the ‘government’ of Yoon Suk-yeol and other idiots who continue creating the dangerous situation,” Kim Yo-jong said in an English-language statement released by the state-run Korean Central News Agency.

She implicitly threatened the South Korean capital, saying, “Seoul had not been our target at least when [former President] Moon Jae-in was in power.”

In fact, Moon had been targeted — at least verbally — by Kim, vice department director of the Central Committee of the Workers’ Party of Korea, in the past.

In March 2020, a year after a Hanoi summit between Washington and Pyongyang collapsed, Kim issued a statement comparing the Moon administration to “a burnt child dread[ing] the fire.”

In June that year, shortly after North Korea demolished an inter-Korean liaison office, Kim issued a statement accusing Moon of “shameless sophism” for remarks he made on the 20th anniversary of the first inter-Korean summit of 2000.

Kim appeared to tone down her statements after that, until in August she switched to the new conservative administration, calling Yoon’s “audacious initiative” — an offer to economically aid North Korea to persuade it to give up nuclear weapons — “repulsive.”

This time, discussions between Washington and Seoul on sanctions appear to have ticked her off.

“On Nov. 22, the Foreign Ministry of South Korea described the DPRK’s exercise of the right to self-defense as ‘provocation,’ announcing that it is examining its additional ‘independent sanctions’ as the ‘provocation’ continues,” she was quoted as saying by the KCNA, referring to her country by the acronym of its full name, the Democratic People’s Republic of Korea.

The Foreign Ministry announced on Tuesday that it may impose sanctions on the North’s cyber activities if the regime carried out a major military provocation like a nuclear test.

The ministry’s statement followed an announcement by the State Department on Nov. 16 that said a working group of American and South Korean officials addressed North Korea’s “unlawful cyber activities” and were working on developing cyber sanctions.

The State Department has released reports stating that North Korea has attempted to steal as much as $2 billion through illicit cyber activities as of late 2019 to try to fund its weapons programs.

“The exceptionally sensitive response [of the North] to our review of sanctions on its cyber activities shows that our efforts to dissuade North Korea from developing its nuclear weapons [with these sanctions] are paying off,” Lim Soo-suk, spokesperson for the Foreign Ministry, told the press on Thursday.

“By strengthening sanctions against North Korea in close cooperation with the United States and the international community, the South Korean government will unwaveringly create an environment in which North Korea has no choice but to give up its nuclear program and return to negotiations on denuclearization.”