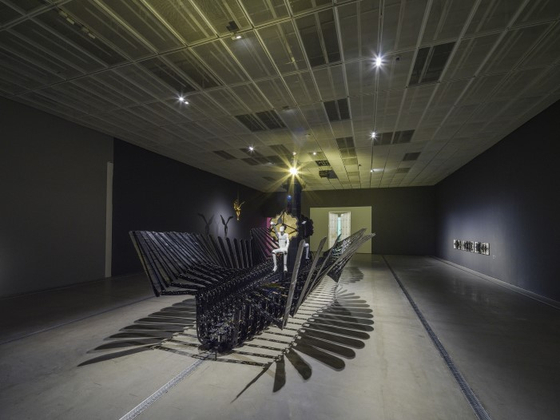 
A little ark has made its way to the National Museum of Modern and Contemporary Art (MMCA) in Samcheong-dong, central Seoul, which “reflects the circulation of humanity.”

Kinetic artist Choe U-ram is the finalist of the “MMCA Hyundai Motor Series 2022” and presents the “Little Ark” exhibition starting Friday with 53 works, 49 of them new ones, consisting of installations, sculptures, videos and drawings.

The annual “MMCA Hyundai Motor Series,” which started in 2014, sees the MMCA in partnership with Hyundai Motor choose a prominent artist or artist team each year and hold their solo exhibition.

Choe last displayed a mechanical installation piece at the MMCA’s Seoul branch in 2013. His latest solo exhibition was at the National Taiwan Museum of Fine Arts back in 2017. 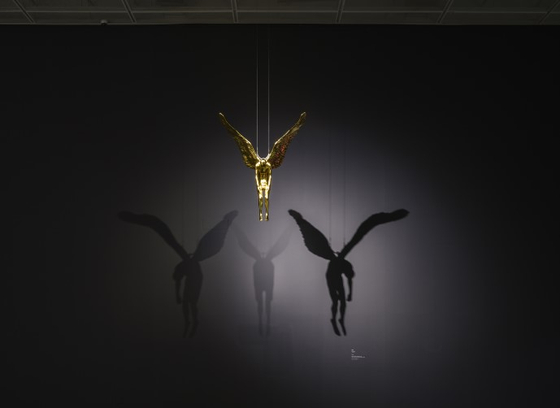 ″Angel″ (2022) is described as the ark’s figurehead that is ″sagging with exhaustion.″ [MMCA]


The Seoul-based artist, who turns 52 this year, is best known for his “anima-machine,” or machinery installations that are each elaborately designed to have their own narratives.

“Little Ark” (2022) is the new titular installation piece that uses recycled cardboard boxes for the oars of the ark, which are programmed to flap majestically according to a set routine that lasts for some 20 minutes.

Choe said he used cardboard boxes because they are “extremely common” and “wasted easily.”

“I didn’t want to erase their trace, so if you look closely you can see some of them are from [e-commerce company] Coupang or were for snacks,” Choe said during a press preview on Wednesday. 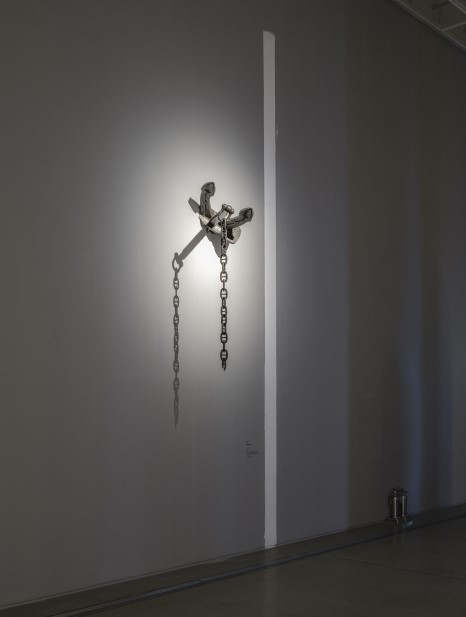 ″Anchor″ (2022) is intended to be vague as it is ″hard to tell whether it has been disconnected or is bound to be connected,″ Choe said. [MMCA]


The performance is mesmerizing. Ambient sound fills the room as a lighthouse, on top of the ark, illuminates the exhibition space from different angles like it’s surveilling something. Two captain figurines, also made from cardboard boxes, are placed on each side of the lighthouse but point their fingers toward the air.

The performance of “Little Ark” ultimately asks, where is humanity headed? Is there even such thing as a “desirable end” to this so-called voyage?

“I wonder if there’s ever been a time when humanity hasn’t lost its sense of direction,” Choe said. “Humans are ceaselessly trying to search for answers for a better life, yet we clash with each other because we have different desires. I believe that it’ll be difficult to ever find a solution. Instead of looking for the exit or trying to escape, the Earth itself is like an ark. Humanity keeps on repeating itself. I wanted to portray a 2022 version of an ark; one that reflects ourselves.”

“Exit” (2022), a single-channel video right across from “Little Ark,” which shows doors endlessly opening to find more doors opening, adds weight to the point Choe is making with the flow of humanity having no “destination.” 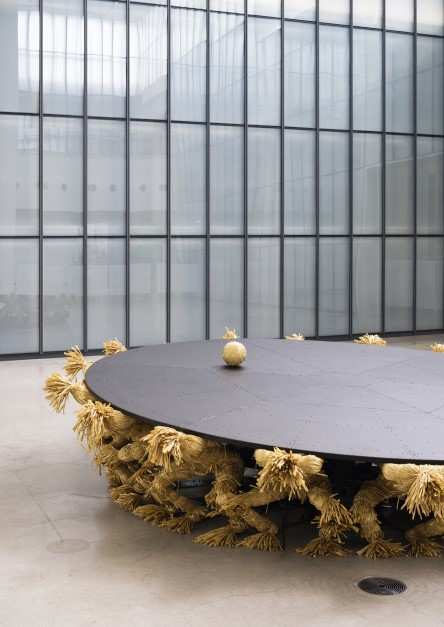 ″Round Table″ (2022), with the headless straw men carrying a black round table and a ″head″ on their backs [MMCA]


Choe worked hand in hand with a number of technological experts, especially those in the robotics industry. The movements are meticulously impressive in that his machinery installations seemingly breathe with life.

For instance, “Round Table” (2022), which starts the exhibition, shows 18 headless figures made from artificial straw carrying a large black round table on their backs. On top of the table is a ball — or a “head,” as Choe calls it — and each figure apparently fights to claim that head.

As each figure attempts to retrieve the head by lifting itself up, the slope of the table causes the head to just roll further away, lessening the chance for any of them to actually obtain it.

The piece is programmed to have the head roll around on the table and while one may wonder if it ever just rolls onto the floor, Choe said he took precise measures through trial and error to make sure it rarely does. A camera, attached to the ceiling, keeps track of the head’s location on the table and sends signals to a computer which then decides where the ball should roll to next. 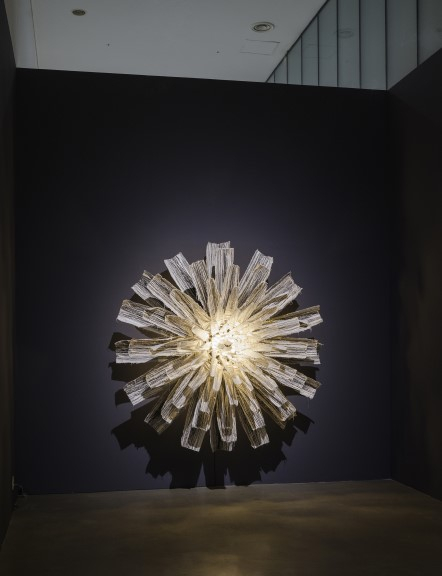 ″One″ (2020), a flower machine that repeatedly blooms and withers with a quaint rustling sound [MMCA] 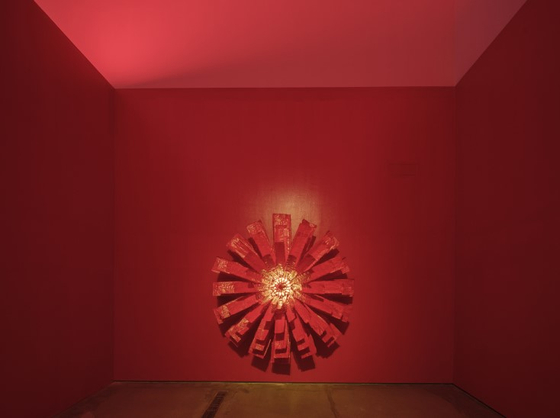 ″Red″ (2021), a flower machine that repeatedly blooms and withers with a quaint rustling sound [MMCA]


“The technology itself also acts as a metaphor because the core technology is in the center of the piece, underneath the table, where people can’t see it,” Choe explained. “Only the edge of the table is visible [where the straw figurines are] and it is exactly what this exhibition aims to do: explore the essence, despite being invisible on the surface.”

To further dive into the “essence,” Choe has his drawings displayed in the exhibit as well, which depict his installations’ designs on canvas and provide visitors insights on how his artworks came to life.

Some aesthetically pleasing works are the metallic machinery pieces “Cakra Lamp” (2013), which shines and was created in the form of a lotus flower, and “Red” (2021), a glowing red flower that repeatedly blooms and withers.