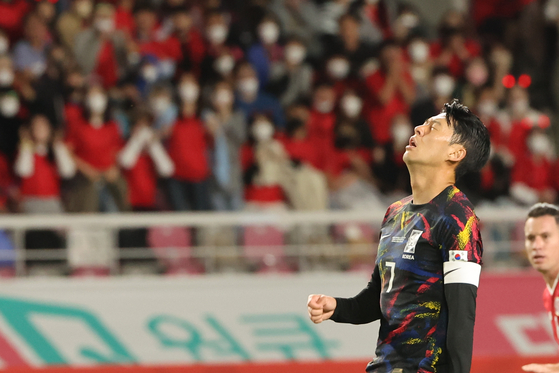 Son Heung-min reacts after missing a shot during a game against Costa Rica at Goyang Stadium in Goyang, Gyeonggi on Friday. [YONHAP]


Head coach Paulo Bento has his work cut out for him with just two months to go before the 2022 Qatar World Cup as he tries to build on the jumble of missed opportunities that was Korea’s messy 2-2 draw with Costa Rica on Friday.

Playing with very little effort at an effective midfield, Korea appealed to be attempting to pile at least six men into the box at every opportunity, leaving no room for anybody to work and certainly no chance for captain Son Heung-min to attempt the quick breakaway attacks he favors.

Despite managing to eke out a draw, the majority of the core Taeguk Warriors proved largely ineffective.

The one noticeable exception was Hwang Hee-chan, who put in a performance that belied his terrible club statistics over the past seven months.

As well as securing Korea’s opening goal in the 28th minute with a lovely effort from the edge of the box, Hwang Hee-chan ran circles around the Costa Rica defense and appeared to create more opportunities than the majority of his teammates combined. 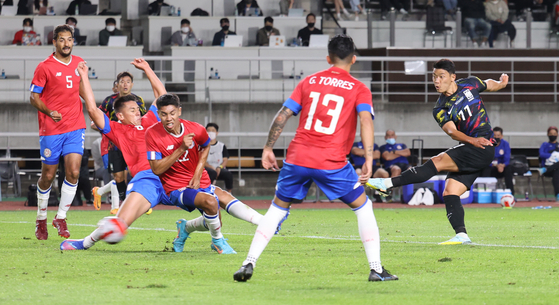 
Hwang In-beom also had a good game, providing some very well-placed crosses and generally managing not to lose the ball at every opportunity.

Hwang Ui-jo and Kwon Chang-hoon both made early exits in the second half after some especially disappointing performances. Both national team regulars missed multiple chances in front of goal, either losing control completely or sending the ball flying over the bar.

Son also had a disappointing game, missing multiple opportunities, often by quite some distance. Part of that was down to the pressing defense, but that’s inevitably something Korea need to be able to neutralize — there isn’t going to be a single team at the World Cup that hasn’t worked out that Son needs to be aggressively marked.

The Tottenham Hotspur forward did provide goal No. 2, a direct free kick from just outside the box that he sent curling into to the top right corner. The goal was a perfectly executed free kick, but it was only because Esteban Alvarado slightly misjudged where his own box ended and earned a direct red card for an intentional handball that Son had the opportunity at all.

Na Sang-ho, Hong Chul and Jeong Woo-yeong, who all came on in the second half, showed some potential, although none of them were on the pitch long enough to do any damage.

Veteran midfielder Lee Jae-sung stayed stuck firmly on the bench, as did 21-year-old Lee Kang-in, whose three assists and a goal in six La Liga games this season were apparently not enough to convince Bento to give him a go.

Ultimately, a draw is a draw and Bento are likely to focus on that positive as they start preparations for next week’s game against Cameroon. But for a team that has to try and hold their own against Uruguay and Portugal in two months, such a messy draw against world No. 34 Costa Rica should be a serious red flag.

Bento now has very few opportunities left to get the Taeguk Warriors formula right before it’s tested at the very top level in Qatar.

Korea will face Cameroon at 8 p.m. on Tuesday, after which the players will all return to their respective clubs until the next international break starting on Nov. 20, four days before Korea face Uruguay in their opening games of the 2022 Qatar World Cup.