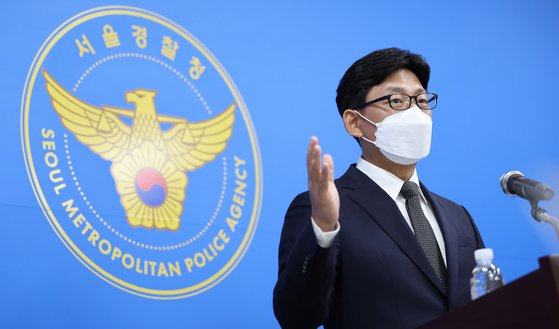 A police official gives a press briefing on the arrest of nine suspects who distributed 2.9 kilograms of methamphetamine smuggled into Korea from Southeast Asia at the Seoul Metropolitan Police Agency in central Seoul on Wednesday. [YONHAP]


The Yoon Suk-yeol administration is assembling a task force to fight the drug trade and the use of drugs, according to a number of administration sources who spoke off the record.

“Preparations for a war on drugs is happening at a fast pace,” a high-ranking presidential official told the JoongAng Ilbo by phone Sunday. “It is a matter of the country protecting its people.”

The initiative comes as Korea faces a flood of illegal substances from overseas and as the use of drugs becomes more widespread in a society once known as essentially drug free.

“President Yoon Suk-yeol is already aware of the seriousness of the drug problem. We will come up with the most intensive countermeasures,” another aide told the JoongAng Ilbo.

The “war on drugs” will involve the formation of a pan-governmental joint investigation team with the prosecution and police partnered with related agencies, such as the National Intelligence Service (NIS) and the Korea Customs Service, the sources said.

Large cities, like Seoul, Busan and Incheon, are expected to be key areas for the crackdown to block the entry of drugs into Korea.

“The prosecution has already started the basic work to crack down on the overseas supply chain,” a member of the conservative People Power Party (PPP) said.

“Drugs have a destructive effect on almost all sectors of a country, such as society, economy, welfare, culture, defense and education,” said the PPP member. “Once called a drug-free country, Korea is turning into a drug-polluted country. Once a society is addicted to drugs, there is no medicine to cure it.”

According to data collected from the Korea Customs Service and the National Police Agency by PPP Rep. Song Eon-seog, the amount of smuggled drugs caught by customs authorities increased 18.4 times from 69.1 kilograms in 2017 to a record 1,272.5 kilograms in 2021. During the same period, drug-related crimes increased 6.9 times, from 719 cases in 2017 to 4,998 in 2021.

Drug use, which has long been largely limited to the wealthy and those related to organized crime, is spreading to the mainstream, with housewives, students, office workers, civil servants and military personnel increasingly found to be using.

Advertisements for drugs are posted on social media, such as Twitter, and Telegram.

According to the National Police Agency, drug-related arrests this year as of June totaled 5,988, a 17 percent increase from the same period last year.

The sharp increase in the number young offenders may be related to their understanding of online transactions and their use of instant messaging app Telegram, which protects the identity of the user.

After buying the drugs using cryptocurrencies over the dark web, the drugs are often delivered by international mail or courier services.

On Sept. 26, Don Spike, a 45-year-old composer and producer whose legal name is Kim Min-soo, was arrested at a hotel in Gangnam, southern Seoul, for possession of methamphetamines, which he bought through Telegram.

With the increase in the supply of drugs, the price of methamphetamines has recently dropped to around 24,000 won per dose. New drugs in the form of jellies, candies and patches have been distributed to young people.

Korea is located close to Southeast Asia, where a large volume of drugs, including methamphetamines, is manufactured and traded.

Lawmakers are calling for the punishment for drug offenders to be increased.

“Drug smugglers prefer Korea because the punishment for drug offenders is more lenient than in other countries and customs procedures are less strict,” said the PPP member. “For the sake of future generations and a healthy Republic of Korea, we must declare an all-out war on drug crimes and restore its reputation as a drug-free country.”