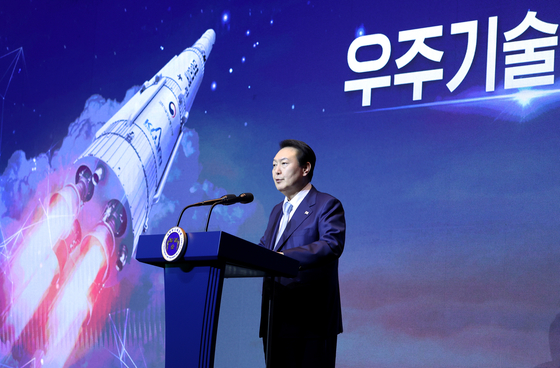 
Korea is establishing a space agency and plans to reach the moon by 2032 and Mars by 2045.

“Korea’s flag will be planted on Mars in 2045,” President Yoon Suk-yeol said Monday.

The missions will be uncrewed and one way, but Korean rockets and landers will be used. Under the plan issued by the president, Korea will develop a rocket engine for a lunar mission with domestic technologies in five years and begin resource mining on the lunar surface in 2032. The government hopes to achieve a Mars landing by 2045.

“In the future, countries with a space vision will lead the world’s economy and will be able to solve the problems that humanity is currently facing,” said Yoon, promising to strive to bring the next generation “lunar resources and a home on Mars.”

According to Yoon, the government aims double the space development budget in the next five years to boost space-related projects and draw at least 100 trillion won ($74.7 billion) of investments to the space sector by 2045.

Korea has completed two test launches of the domestically-developed Nuri rocket. A payload achieved low-earth orbit in the second launch in June. Danuri, the country’s first lunar orbiter, was carried by SpaceX’s Falcon 9 rocket on Aug. 4.

Yoon also emphasized that Korea will strengthen its ties with the United States in the space sector, especially regarding national security.

“The Korea-U.S. alliance will be extended into the Korea-U.S. space alliance, and we will expand the cooperation with the international society in space security,” said Yoon.

The government plans to establish an aerospace agency next year, which will oversee government-led space programs currently scattered in various departments and agencies.

Named the Korea Aerospace Administration (KASA), the new space agency will operate under the Ministry of Science and ICT. KASA’s head will be a vice minister-level official.

A space agency was one of the Yoon administration’s national agenda items.

Though Yoon promised to “set up an aerospace agency similar to the NASA of the United States” in August, KASA will not be an independent agency under the executive branch like NASA, as it will be placed under the Science Ministry.

But the government aims to give the new aerospace unit autonomy in managing the budget and hiring experts compared to other agencies operating under a ministry.

According to a presidential office spokesperson, KASA will be an expert-centered, program-based organization, set apart from traditional bureaucratic agencies that lacked expertise and efficiency.

Whether the Korea Aerospace Research Institute, which has been leading Korea’s space missions, will be placed under KASA or operate as a separate organization is yet to be decided.

The Ministry of Science and ICT established a steering group for establishing the new space agency on Monday.

The Yoon administration hopes to bring the private sector into space exploration amid the global transition to the “new space” era.

Hanwha Aerospace was recently selected as a preferred bidder for the technology transfer for the first domestically-developed Nuri launch vehicle. The company will participate in the next four test launches of the Nuri rocket.