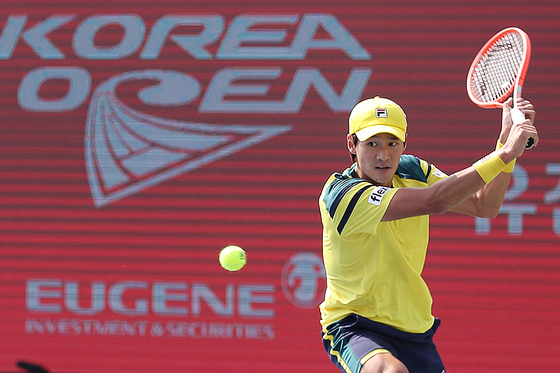 Kwon Soon-woo lunges for the ball during a round of 16 match against Jenson Brooksby on center court at the Korea Open at Olympic Park Tennis Center in southern Seoul on Thursday. [NEWS1]


Kwon Soon-woo crashed out of the Korea Open on Thursday, falling in straight sets to eighth seed Jenson Brooksby of the United States.

Kwon started the match looking good in front of the home crowd, pushing Brooksby to five deuces on the American’s first serve, but ultimately conceding the point. Kwon continued to push hard but was unable to keep up with the world No. 46.

Kwon looked more confident in the second set, where he was able to fight back to tie the score at 3-3 before ultimately dropping behind again to concede the set and the match.

Kwon, the Korean No. 1, was the only Korean left in the Korea Open at the Olympic Park Tennis Center in southern Seoul, having beaten countryman Chung Yun-seong in the round of 16 on Tuesday.

But while Kwon is out of the singles tournament his Korea Open campaign isn’t over yet. Kwon and former Korean No. 1 Chung Hyeon booked their spot in the doubles quarterfinals on Wednesday when they beat Hans Hach Verdugo of Mexico and Treat Conrad Huey of the Philippines.

Kwon and Chung will face fourth seed Andre Goransson of Sweden and Ben McLachlan of Japan in the quarterfinals.

In the singles tournament, Brooksby advances to the quarterfinals where he will face second seed Cameron Norrie.

Novak Djokovic returns to world No. 1 after Australian Open win