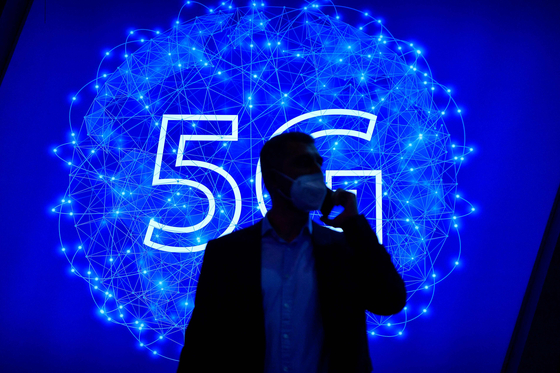 A 5G logo displayed at the MWC held in Barcelona on Feb. 28 [AFP/YONHAP]


Korea crowed three years ago about beating the world to 5G. Now it’s wondering what all the fuss was about.

Services are slower than hoped for and not very useful, while the companies grumble about the high cost of installing the equipment that would get 5G to hit its headline numbers.

The only real 5G that is available to the Korean public is basically glorified WiFi in the subways.

“There is no way the telecommunications companies will be able to make it work at this point,” said Kim Yong-hee, a business professor at Dongguk University Graduate School of Digital Image and Contents, in discussing nationwide 5G.

The problem comes down to spectrum. Ultra-fast 5G — the kind that was marketed in 2019 with great fanfare — utilizes the 28-gigahertz band in Korea. This “True 5G” is 20 times faster than 4G in terms of download speeds.

5G consumers get now is carried on the 3.5-gigahertz band. It is just four to five times the speed of 4G.

Phone companies are dragging their feet on the rollout of 28-gigahertz infrastructure, citing high cost and low profit.

“How much of the mandatory installation target for 28-gigahertz base stations did the telecom companies achieve so far?” asked independent Rep. Park Wan-joo said in the National Assembly on Oct. 4. “It’s less than 10 percent.”

“I’m not saying we have to achieve 100 percent coverage for the 28-gigahertz 5G network, but I believe that the government should encourage installation at least in populated and necessary areas,” Park said.

“It’s like building a house that no one will live in,” said a source at one of the three largest phone companies when discussing True 5G in Korea.

Korea’s three largest telecom companies — SK Telecom, KT and LG U+ — spent a combined 620 billion won ($434.5 million) in 2018 to license the 28-gigahertz spectrum for five years. The companies were required to install 15,000 base stations each for the 28-gigahertz 5G network by 2021, but they achieved about 5 percent of that target by May.

The 28-gigahertz base stations were installed in subways and have not been placed so that the signals reach homes, and the streets.

“The 28-gigahertz ecosystem has not been established yet,” the source said.

Handsets are the other problem, in a chicken-egg sort of way.

In the United States, Samsung and Apple smartphones are sold that support high-band 5G networks, but none were released in Korea. Manufacturers have no reason to roll out devices that support the 28-gigahertz band as there is no infrastructure.

“To make it a public network available in a broader range, the smartphone manufacturers need to make chipsets and related modules, but that is also lacking at this point,” the source added.

In order for the 28-gigahertz 5G network to be available to individual consumers, much more money is needed. 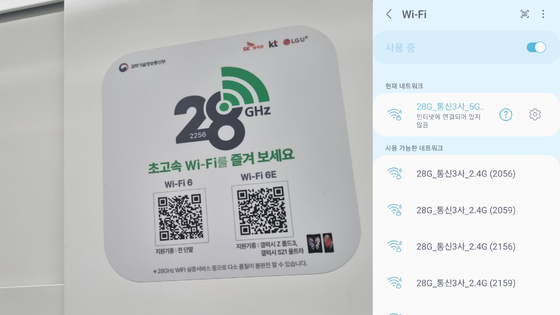 From left: The ICT ministry and the three telecom companies run a test operation of 28-gigahertz 5G WiFi service on subway Line No. 2 — from Sinseol-dong station to Seongsu — in Seoul. Screen capture of WiFi setting screen displaying a message that the 28GHz 5G WiFi connection is currently unavailable. [SHIN HA-NEE]


Telecom companies are eyeing a business-to-business model, instead of a business-to-customer model, for high-band 5G. The companies are offering ultra-fast and ultra-low-latency 5G network connections in limited areas for business purposes, such as smart factories.

The Ministry of Science and ICT formed a task force last year to encourage the 28-gigahertz band utilization with the telecom companies, and installed 5G WiFi modules utilizing the 28-gigahertz band in a subway section in Seoul for a test operation. It does not need a specialized device for access.

The connection was unstable at best. The WiFi signal could weaken particularly at the far ends of the subway line, explained the ICT ministry.

Though the ministry initially aimed to begin the 28-gigahertz WiFi service in other subway lines in the latter half of this year, the plan has been postponed to next year.

“The telecom companies are struggling to make investments in the 28-gigahertz band network, as it costs much more than the 3.5-gigahertz band,” said Kim.

Kim said that “it is impossible for the companies to provide nationwide services through a public 28-gigahertz 5G network.”

Experts say that deploying the 28-gigahertz band for public 5G network service is not — and never has been — a viable option.

“In the long term, the telecom companies will need to provide the 28-gigahertz band network service eventually, but it is not that high in demand at this point.”

Kim emphasized that the government should make the high-frequency band available to a larger number of companies and researchers to develop a new business model and service with the high-band 5G.

One alternative use for the 28-gigahertz band is private 5G networks.

A private 5G network is an independent system with dedicated bandwidth in a limited area, such as in a factory or a building, that can be set up by non-telecom companies. In Korea, 4.7-gigahertz and 28-gigahertz bands are dedicated to private 5G networks, and organizations that wish to set them up must get a license from the Ministry of Science and ICT.

In June, the government said that it will pour 48 billion won into the private 5G network projects.

Though the telecom companies are not eligible for private 5G network licenses, they are joining the projects led by other companies as equipment suppliers or consortium members.

As the license period for the 28-gigahertz band ends on Nov. 30, 2023, the telecom companies must decide whether to extend the period by May next year.

Executives from the three telecom companies are expected to attend the parliamentary hearing for the ICT ministry slated for Oct. 24. The 28-gigahertz 5G service may be discussed that day, along with other major issues, such as Kakao outage, network usage fees, mid-range 5G subscription plans and quality issues for the 3.5-gigahertz 5G network services.