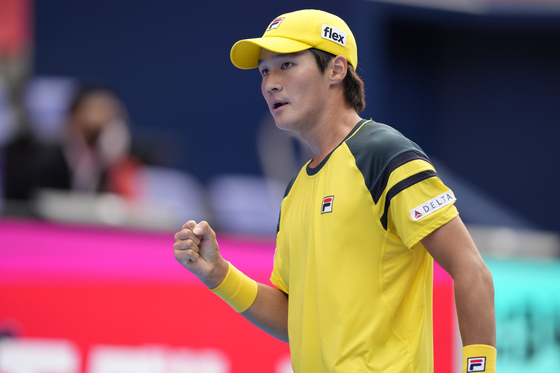 Kwon Soon-woo reacts after gaining a point against Frances Tiafoe of the United States during a semifinal match at the Japan Open in Tokyo on Oct. 8. [AP/YONHAP]


Top seed Kwon Soon-woo will face Aleksandar Vukic of Australia in the round of 16 at the Busan Open on Thursday as he looked to build on a solid performance at the Japan Open earlier this month.

Kwon, the top-ranked Korean, enters the Busan Open, a tournament on the second-tier ATP Challenger Tour in good form, having made it as far as the semifinals at the Japan Open two weeks ago.

In Tokyo, Kwon beat world No. 23 Alex de Minaur, world No. 78 Mackenzie McDonald and world No. 69 Pedro Martinez to reach the semis, where he fell to world No. 19 Frances Tiafoe. The Japan Open is an ATP 500 event with a high number of tournament points available, attracting a far higher class of tennis player than other events.

The semifinal in Japan was Kwon’s first at an ATP Tour tournament this season and the first-time ever to reach the semifinals at an ATP 500 event. It also came as welcome consolation after he dropped out of the ATP 250 Korea Open in the quarterfinal a week earlier.

Kwon had beaten countryman Chung Yun-seong in the round of 16 before falling in straight sets to eighth seed Jenson Brooksby of the United States in the quarterfinals.

In addition to his singles run at the Korea Open, Kwon had paired up with former Korean No. 1 Chung Hyeon to play the men’s doubles. With Chung returning to the court for the first time in two years, the pair reached the doubles semifinals on home soil, beating Andre Goransson of Sweden and Ben McLachlan of Japan after three sets.

Kwon has one ATP title to his name, having won the Astana Open in September last year. The win made Kwon only the second Korean to win on the sport’s top-tier tour alongside retired tennis player Lee Hyung-taik.

After the win, Kwon had reached a career high at No. 55 on Oct. 4, 2021. ATP tour points drop off after a year on a weekly basis, meaning that points won any longer than 52 weeks ago no longer count toward a player’s world ranking.

Kwon’s ranking had dropped to No. 120 in the world after the Astana Open points dropped off in September, but his success at the Japan Open has pushed him back up to No. 84.

In Busan, Kwon faced qualifier Maximilian Neuchrist of Austria in the first round on Tuesday, beating him in straight sets, 6-4, 6-2, to advance to the round of 16. If he beats Vukic on Thursday, Kwon will face either sixth seed Kamil Majchrzak of Poland or world No. 259 Hamad Medjedovic of Serbia.

Kwon and Vukic have never faced each other before.

Kwon isn’t the only Korean to make it to the round of 16.

Nam Ji-sung also made it through, but was knocked out by fifth seed Christopher O’Connell of Australia on Wednesday, while Hong Seong-chan and Chung Yun-seong are set to face each other in an all-Korean round of 16 game on Thursday.