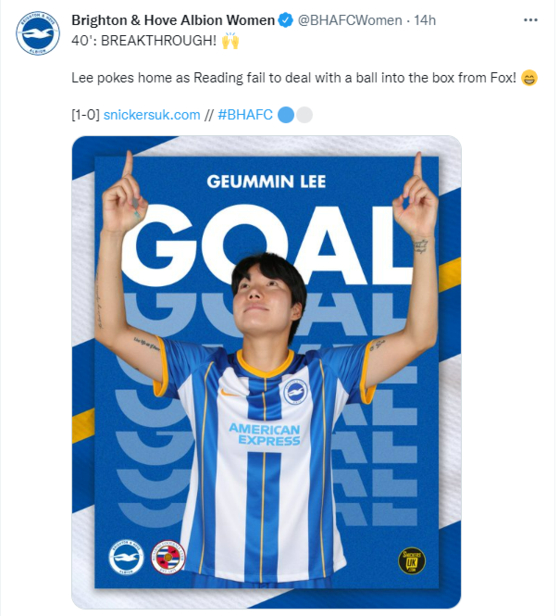 
Lee Geum-min scored her first goal of the 2022-23 Women’s Super League season on Sunday, knocking in the opener in Brighton’s 2-1 win over Reading.

Lee, who is now in her third season playing for the Albion, came through in the 40th minute, picking up a loose ball in the box and drilling it past Reading goalkeeper Grace Moloney to take the score to 1-0.

Brighton added a second in the 80th minute, before Reading got one back in injury time to end the game at 2-1 at the American Express Community Stadium in Brighton.

With the win, Brighton are in eighth place in the 12-team Super League with two games now played, having lost 4-0 to Arsenal in the opening game last week.

Lee joined Brighton in 2020 on loan from Manchester City and then made the move permanent last year. She is one of three Korean women currently playing in the super league, alongside teammate Park Ye-eun, who was on the bench on Sunday, and Tottenham Hotspur’s Cho So-hyun.

Brighton is the only top tier club in a major European league with two active Korean players in the same team.

Hwang Ui-jo and Hwang In-beom are both active with Olympiacos — although Hwang Ui-jo is only on loan — but the Greek Super League is not considered one of the major European leagues.