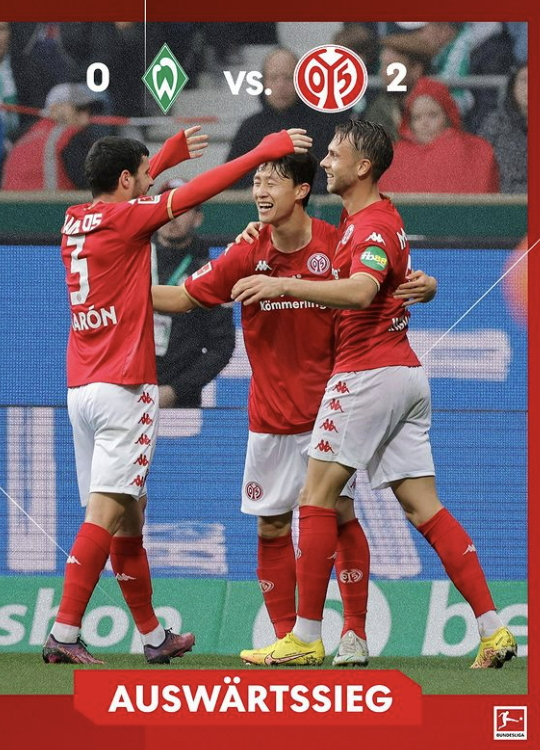 
Lee Jae-sung scored his second goal of the season on Saturday, slotting FSV Mainz’s final goal in a 2-0 victory over Werder Bremen at Weserstadion in Bremen, Germany.

Starting the match Saturday, Lee did not wait to find a chance to score. The whistle blew, and Lee within the first minute already attempted a shot with his right foot from the center of the box but narrowly missed to the left of the net.

He found another chance to hammer at the goal in the next minute. Anton Stach sending over the ball to Lee, he shot with his left foot from the center of the box in the second minute but was blocked, marking the first shot on target of the match.

Lee kept on going, assisting Aaron Martin in the 17th minute, but was caught offside. In the 26th minute, Lee once again shot with his right foot but was blocked.

In the 35th minute, it was Marcus Ingvartsen who opened the scoring for Mainz after heading in from the center of the box after Danny da Costa sent over a cross.

Mainz kept on hammering at the Bremen side of the field, with Lee assisting Karim Onisiwo’s right footed shot from outside the box in the 55th minute only to be blocked by the Bremen goalkeeper.

Lee’s real chance came in the 65th minute, when Stach found Lee once again in the left side of the box and sent the ball over, allowing Lee to kick it with his left foot past the Bremen goalkeeper into the bottom left corner.

With neither club able to add any more points until the final whistle blew, Mainz was able to cut their winless streak to four matches with Saturday’s win.

For Lee, this goal marks his second of the season. Lee scored his first goal on Aug. 20 when he headed in the winning goal for Mainz in injury time, bringing home a 2-1 victory over FC Augsburg.

The Korean national team regular and Mainz midfielder has been playing for Mainz since last season. Having started his career with the Jeonbuk Hyundai Motors in 2014, Lee moved to Holstein Kiel in 2018 and played there until 2021. Last season, Lee scored four goals and marked three assists in 27 appearances with Mainz.